Our study focuses on the deicing and anti-icing activities at Dallas Fort Worth International Airport (DFW). Typically, DFW experiences meteorological conditions that require airplanes to undergo deicing or anti-icing operations in accordance with Federal Aviation Administration (FAA) safety regulations from late October to early April. In the aftermath of a devastating fish kill in 1999 in Trigg Lake (a local reservoir for ADAF runoff) caused by the deicing–anti-icing activities at the airport, DFW upgraded its ADAF collection systems to comply with water quality regulations and to meet the FAA safety regulations regarding deicing–anti-icing operations (Corsi et al. 2006). ADAF runoff is now collected at eight deicing pads, and then pumped out to the airport’s reverse osmosis wastewater treatment system.

According to DFW, the airport’s environmental management system captures the spent aircraft deicing fluids completely (100%), so preventing their discharge into the creeks and rivers surrounding the airport (U.S. Environmental Protection Agency 2000). Consequently, only spent aircraft anti-icing fluids contribute to drip and shear and subsequent runoff to the airport’s receiving waters; some amount of fluid drips from the airplane before takeoff, and the remaining fluid shears from the airplane during takeoff (Corsi et al. 2006). As stated, ADAF runoff into the airport’s receiving waters can have an adverse impact on the ecology of receiving waterways because of reduced DO concentrations (Corsi et al. 2006; U.S. Environmental Protection Agency 2000; Masters 1997). To keep track of DO concentrations in airport receiving waterways during deicing–anti-icing periods, DFW partnered with the U. S. Geological Survey (USGS) to set up a system for collecting water quality data at nine sites in the airport’s receiving waterways: an urban reference site at Blessing Branch (BLSN); an upstream reference site on Big Bear Creek at Euless/Grapevine road near Grapevine, Texas (REF); an airport drainage site at Outfall 19 on an unnamed tributary to Big Bear Creek near Euless, Texas (OF19); an airport site draining into Trigg Lake (IN); three sites within Trigg Lake (S1, S2 and S3); a Trigg Lake outflow site (OUT); and a downstream site on Big Bear Creek at SH 183 near Euless, Texas (DNST). BLSN and REF are reference sites because they are not affected by airport activities. DO concentrations at sites S1, S2 and S3 within Trigg Lake and sites OUT and DNST downstream of Trigg Lake are impacted by aerators in Trigg Lake. Sites IN and OF19 continue to be affected by airport activities. Figure 1 shows the layout of the nine USGS monitoring sites (squares) and eight deicing pad locations (circles) at DFW. 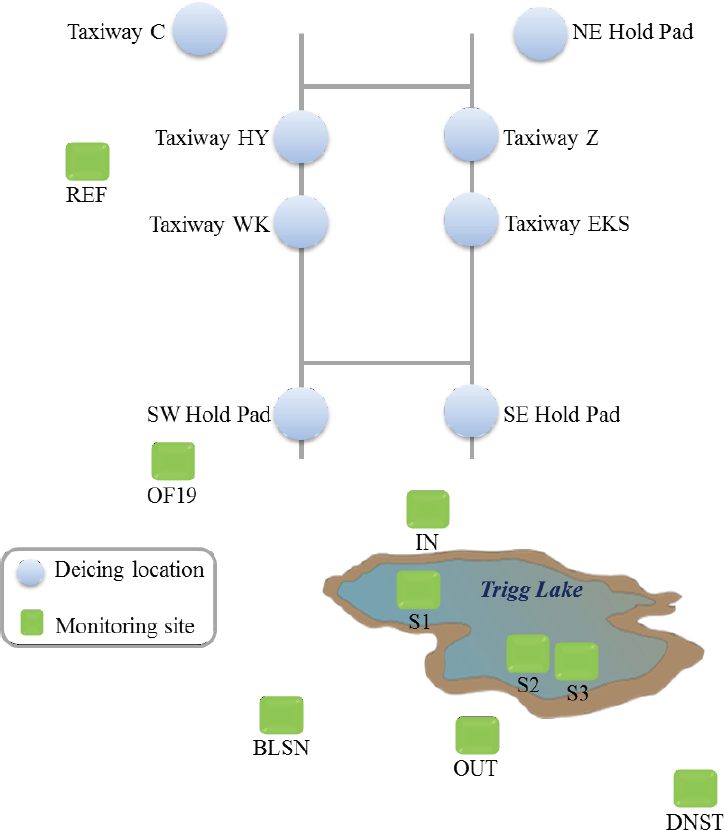 DFW utilizes these data to monitor DO concentrations in its receiving waters for the purpose of improving its deicing–anti-icing practices. In this study, we set out to examine DFW’s hypothesis that the deicing fluids are completely captured before planes exit the deicing pad, leaving only the anti-icing fluids to runoff into the airport’s receiving waters from drip and shear. We use decision trees to examine this hypothesis regarding the efficacy of DFW’s ADAF collection facilities, using some of the results from Kim et al. (2007) and Fan et al. (2011).

The USGS continuous monitoring data were obtained via sensors every 15 min to 20 min. Glycol usage for each day was aggregated by airline and deicing pad location. The data for meteorological variables were collected hourly. The following data sets were created to facilitate the analyses presented here:

Since deicing activities were only recorded by day for data set 2, measurements taken >1 time/d were aggregated to obtain a daily measure. The daily minimums of hourly-averaged DO were obtained and the daily averages were calculated for other variables, with the exception of daily precipitation which was obtained by adding hourly precipitation measures over the day. Wind speed and wind direction variables in the meteorological data were transformed using the method described by Fan et al. (2011). 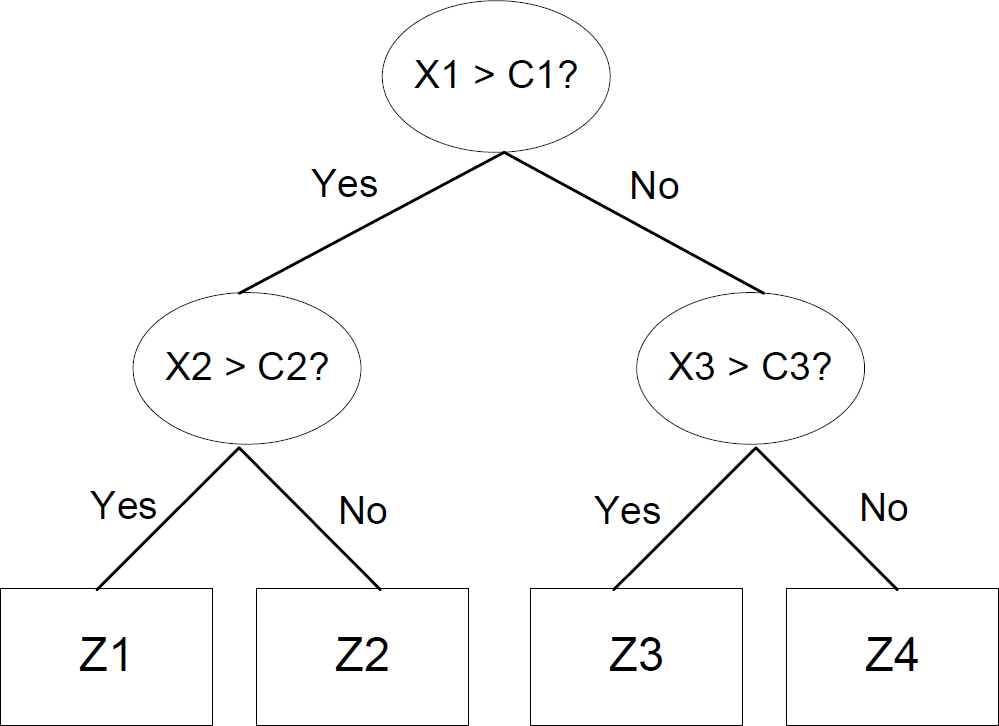 In order to evaluate the DFW claim that the deicing fluids are completely washed away before the airplanes depart from the deicing pad locations, the decision tree analyses were conducted. The analyses also incorporated DO related results from Kim et al. (2007) and Fan et al. (2011). Two new decision tree models were constructed by first separating the deicing glycol usage (DG) and anti-icing glycol usage (AG) from the total glycol usage (TG) in data set 4 and then adding these variables back into data set 4. A decision tree model was run with only AG and another decision tree model was run with both DG and AG separated, instead of TG. Next, the relationship between DO in data set 1 and other explanatory variables, including glycol usage (TG, DG and AG) in data set 4 and meteorological variables in data set 5 were examined. As discussed earlier, DO observations were aggregated for a day by first taking hourly averages and then identifying the minimum hourly-averaged DO for that day. Another data set that contained the deicing activities data specific to the particular location was created for each deicing pad location. Glycol usages that were lagged by a day were added subsequently as potential explanatory variables. Table 1 shows deicing pad locations and time durations.

The decision tree analyses were conducted using the software Classification and Regression Trees (CART) (www.salfordsystems.com). CART assigns variable importance scores to help with the variable selection. The variable with an importance score of 100 is deemed the most influential for prediction, followed by other variables in descending order of their importance scores. Variable importance was first defined in Breiman et al. (1984) using a measure M(xn) involving surrogate split on a variable xn. The measure of importance used is the normalized quantity 100·M(xn)/max M(xn), resulting in a value in the range 0 (least important) to 100 (most important).

Table 2 shows the rankings of important variables for predicting DO at each deicing pad location in a decision tree model that includes TG and TG Lag (total glycol usage lagged by 1 d) as variables. The splitting information associated with Table 2 is shown in tree structures labelled (a) in Figures 3 through 9 below. These results were previously included in Fan et al. (2011), and indicate that TG and TG Lag variables appear in the tree models for taxiways WK and C and hold pad SE. The predictor variables were the monitoring sites (OF19 and IN), TG, TG Lag, and the meteorological variables EW and NS. The key results include the following:

The decision trees for taxiways WK, C, and hold pad SE include at least one group with median DO <4.0 mg/L, and these low DO groups are associated with high TG.

Table 3 shows the rankings of important variables for predicting DO at each deicing pad location in a decision tree model that includes the AG variable. The splitting information associated with Table 3 is shown in tree structures labelled (b) in Figures 3 through 9 below. The predictor variables were for monitoring sites (OF19 and IN), AG, and the meteorological variables EW and NS. No optimal trees were obtained for taxiway C or hold pads SE, SW and NE. Furthermore, the tree models for taxiways EKS, WK and HY are weaker as they do not show AG to be an important variable.

Table 3 Only anti-icing glycol usage (AG) model (no tree when the data size was too small).

Table 4 shows the rankings of important variables for predicting DO at each deicing pad location in a decision tree model that includes separate DG and AG variables. The splitting information associated with Table 4 is shown in tree structures labelled (c) in Figures 3 through 9 below. The predictor variables were for the monitoring sites (OF19 and IN), DG, AG, DG Lag (DG lagged by 1 d), AG Lag and the meteorological variables EW and NS. The key results include the following:

Table 5 Groupings of DO observations in taxiway WK for the separated deicing and anti-icing glycol decision tree model.

Table 6  Groupings of DO observations in taxiway C for the separated deicing and anti-icing glycol decision tree model.

Table 7 Groupings of DO observations in hold pad SW for the separated deicing and anti-icing glycol decision tree model.