In Ontario, high levels of turbidity or high particle counts are one of the top reasons for issuing DWAs, and 78% of DWAs were issued to water systems that used surface water as their water sources between 2004 and 2013 (Galway 2016). In addition, of the 158 drinking water systems serving First Nations communities in Ontario, 94 systems are surface water systems and another 13 systems are known to be GUDI (groundwater under the direct influence of surface water; Neegan Burnside 2011). Urgent attention is required to protect First Nations communities in Northern Ontario from the potential impacts of drinking water contamination, especially those associated with surface water turbidity. It is important to know whether conditions are likely to become more severe in terms of increased turbidity.

The Walkerton E. Coli outbreak in May 2000 was preceded by a 60 y rainfall event (5 d accumulated rainfall amount on average), and a 100 y event in the heaviest rainfall area, to the south of Walkerton (Auld et al. 2004). Source water turbidity has been associated with acute gastrointestinal illness in Quebec City, Quebec (Gilbert et al. 2006), in Boston, Massachusetts (Beaudeau et al. 2014) and in Milwaukee County, Wisconsin (Morris et al. 1996). Schuster et al. (2005) analyzed drinking-water related waterborne outbreaks in Canada from 1974 through 2001, and suggested a seasonal pattern to outbreaks, with peaks in spring and summer. Spring melt induced overland flow events which, together with intense rainfall events after droughts, were utilized to explain the seasonal increase of illness. Charron et al. (2004) listed extreme precipitation, floods, high temperatures and drought as risk factors for waterborne illness in Canada. Thomas et al. (2006) used the data compiled by Schuster et al. (2005) to estimate an increase of 128% in the probability of outbreaks if the accumulated rainfall fell into the 94th percentile or higher. Charron et al. (2005) found that rainfall characteristics that include the 5 d cumulative rainfall amount and have maximum 1 d rainfall intensity are linked to waterborne disease outbreak frequencies. The statistical significance of waterborne disease outbreaks and extreme precipitation was identified by Curriero et al. (2001), who analyzed 548 reported outbreaks in the United States from 1948 to 1994 and found that 51% of outbreaks were preceded by heavy precipitation events (defined as events above the 90th percentile).

From the above it is clear that intensive rainfall events may affect source water quality through surface erosion (Lee et al. 2016). There are several aspects of soil erosion to consider, including heavy rainfall events after an extended period of drought (Schuster et al. 2005; Charron et al. 2005); surface runoff increasing the deposition of suspended solids and other contaminants (e.g. pesticides or fertilizers) in reservoirs or surface water bodies (Zhou et al. 2015); resuspension of river sediments; the overflow of surface runoff into source water wells (Hrudey et al. 2002); and infiltration into source water wells through shallow aquifers (unconfined systems).

The universal soil loss equation (USLE) introduced by Wischmeier and Smith (1965) estimates the long term average annual soil loss with respect to segments of arable land under various cropping conditions. Wischmeier and Smith (1965) indicated that storm-generated soil losses are directly proportional to the product of total kinetic storm energy and its maximum 30 min intensity. Toy and Foster (1998) discussed the revised universal soil loss equation (RUSLE) and introduced its use to compute the rainfall–runoff erosivity factor R for ungauged sites as: 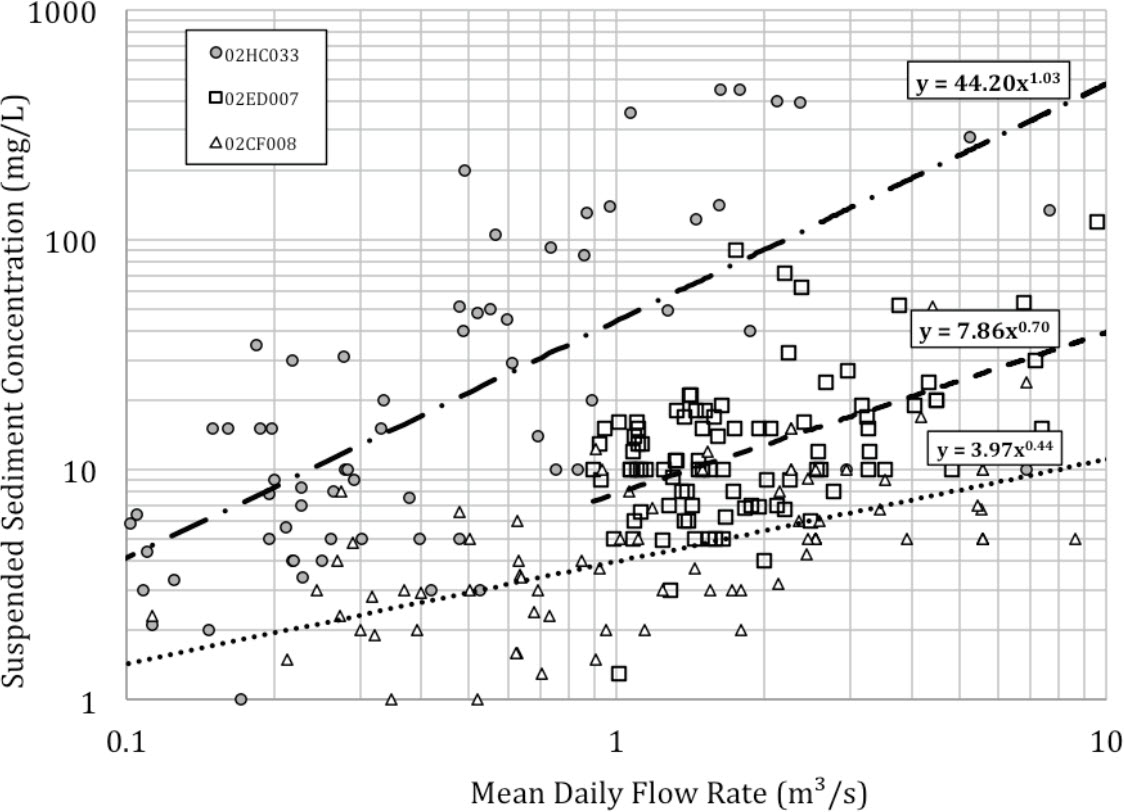 In 2011, the Ontario Centre for Climate Impacts and Adaptation Resources (OCCIAR) conducted workshops in Northern Ontario to discuss local impacts of climate change and adaptation strategies (OCCIAR 2011). The four communities were Hearst, Kapuskasing, Smooth Rock Falls and Cochrane, which are all surrounded by many small communities, including First Nations communities. The communities have experienced various changes in both climate and weather, including warmer temperatures in winter and spring, changes in precipitation, intense storms, and flooding. Some lakes in the area have lower water levels due to warmer spring seasons and changes in precipitation.

This study aims to provide insights into the implications, for the risk of drinking water advisories being issued, of the increasing trends in the frequency of heavy rainfall events. Of particular interest is whether there are changes in heavy rainfall events or droughts in Northern Ontario which may result in increased frequencies of DWAs being issued. Based on the daily rainfall records at three climate stations in Northern Ontario, this research reports on the statistical significance of changes in several rainfall statistics which are related to drinking water treatment system security. The 5 d cumulative rainfall amount and maximum 1 d rainfall amount data were analyzed to identify changes in the rainfall erosivity factor (the rainfall–runoff erosivity factor R in RUSLE, Equation 1). The monthly and the lowest 31 d accumulated rainfall amounts were also examined to identify changes in drought conditions.

Daily rainfall records for Northern Ontario are available from Environment Canada from as early as the 1960s, perhaps earlier. The climate stations located at Sioux Lookout Airport (Station ID: 6037775) and Sudbury Airport (Station ID: 6068150) both have 52 y of rainfall records, covering 1960 to 2012 (substantial numbers of records were missing for both locations for the year 1993). The climate station at Earlton Airport (Station ID: 6072225) has 45 y of rainfall records. The stations were selected from a limited number of available gauges in Northern Ontario based on the proximity of the station to First Nations communities. Figure 2 shows the locations of the climate stations. The background map, The Ontario First Nations Map, was obtained from https://www.ontario.ca/page/ontario-first-nations-maps. 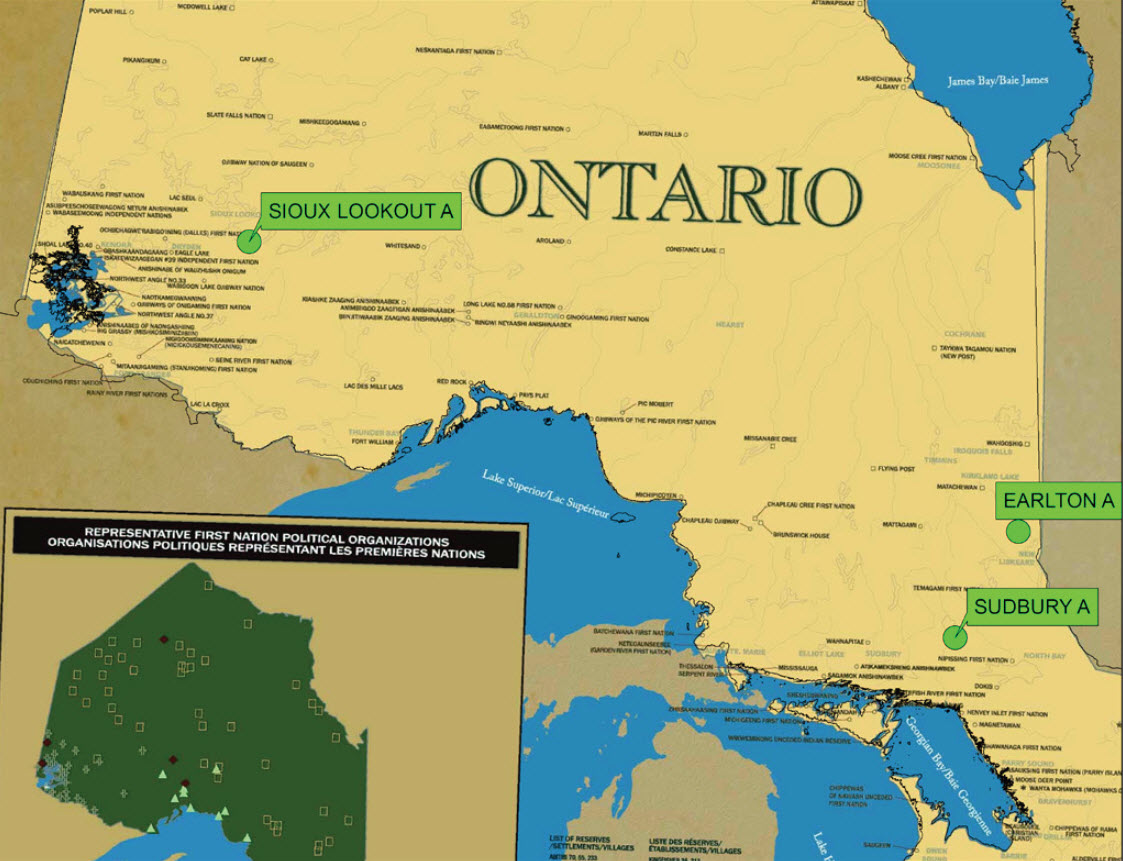 The Mann–Kendall trend test was used to test the monotonic trend in the time series xi. It compares a standardization of the Kendall S statistic to the normal distribution, and rejects the null hypothesis (no monotonic trend) if S is significantly different from zero.

The test statistic S is calculated as:

For large sample sizes (n > 8), S is normally distributed with:

The standardized test statistic Z is calculated and compared to the normal distribution.

S needs to be corrected if there are ties in {xi}, which is very rare if used on the total rainfall amount. The Mann–Kendall trend test was implemented using the R package, R 2013, developed by McLeod (2011).

The bootstrapping method was used to estimate percentiles and related confidence limits. The original data series were resampled with replacement for 1000 samples, and for each resampled dataset the percentile was estimated by interpolating ranked data values which had the closest exceedance probabilities to the given percentile. The non-exceedance probability for the ith largest value was calculated as:

where n is the sample size. The 1000 resampled estimates were pooled together, the mean value was used as the percentile estimate, and the 5% and 95% quantiles were used as the confidence limits of the 90% confidence level.

The total monthly rainfall amounts in June, July and August for Sioux Lookout are shown in Figure 3a as scattered symbols. In Figure 3a the solid black curve represents the lowest monthly total rainfall amount of the three months. These lowest monthly values were further smoothed using local regression (the LOWESS, locally weighted scatterplot smoothing, method; Cleveland 1981) to depict potential trends, and are drawn as the dashed black curve. The lowest 31 d total rainfall amount is drawn as a solid grey curve, along with the local regression curve which is drawn as a dashed grey curve. Similar figures were created for Sudbury in Figure 3b and for Earlton in Figure 3c.

The Mann–Kendall trend test did not detect any significant monotonic trends in the lowest monthly total rainfall amounts. However, the local regression of the lowest 31 d accumulated rainfall amounts showed increasing tendencies at all three locations, and the local regression of lowest monthly values showed increasing tendencies at Earlton and Sudbury as well. In other words, the drought conditions have improved, though the change is not not statistically significant. Moreover, if the current lowest 31 d total rainfall is considered to be a drought at these locations, then it is possible that this drought situation will continue in the near future.

The 5 d cumulative rainfall annual maximum series at Sioux Lookout are shown in Figure 4a, together with the local regression curve (LOWESS). The LOWESS of annual maximum data series shows an obvious decreasing trend until 1980, and an increasing trend thereafter. The 93rd percentile estimates and corresponding 90% confidence limits are drawn in Figure 4a as well. The width of the moving window was selected as 15 y  to reduce uncertainties involved in the percentile estimates. The decreasing trend before 1974 is mainly attributed to the peak event in 1966 (a total of 144.8 mm), and the increasing trend after that is clearly evident. Similar figures were created for Sudbury (Figure 4c) and for Earlton (Figure 4b).

The 1 d cumulative rainfall amount was extracted as a partial duration series, in addition to annual maximum series, to estimate events having return periods <1 y. The threshold value used to construct the partial duration series was the minimum value from the annual maximum series. Events having a recurrence frequency of 2 times/y were estimated, with 90% confidence limits, for a moving window of 10 y.

Figure 5a (below) shows the partial duration series at Sioux Lookout as scattered points and its local regression as a dashed curve. The estimate of the 2 times/y event and 90% confidence limits were calculated and are also drawn in Figure 5a. The estimates of the 2 times/y event increased significantly from barely >20 mm in the late 1970s to almost 40 mm in the late 2000s. A statistically significant increasing trend was also observed in 2 times/y events estimated from the Earlton rainfall records (Figure 5b); however, estimates based on Sudbury rainfall records did not show any significant trends (Figure 5c).

The Mann–Kendall trend test did not detect any statistically significant trends in monthly total rainfall and minimum 31 d total rainfall in summer, which indicates that if the summer droughts in the past several decades were causing substantial soil erosion and subsequently increasing the risks of waterborne disease outbreaks, then these types of risks will probably continue to exist in the near future. Thus the protection of drinking water treatment systems against drought conditions should be continued as well. This conclusion should be applicable to most First Nations communities in Northern Ontario since rainfall records from the three climate stations all show similar stationarity in summer droughts.

Spatial variation amongst the three climate stations was observed in the trends that were detected. In general, Sioux Lookout and Earlton have experienced increases in both the amount and the frequency of heavy rainfall events, while Sudbury has shown more stationarity. Considering that Sudbury is the southernmost station of the three, it is reasonable to predict that First Nations communities located in the far north will experience more changes in heavy rainfall events, and eventually more challenges in providing adequate drinking water treatment.

The research fund provided by NSERC–NCE Res’Eau for small drinking water systems is appreciated, and the data provided by Environment Canada is acknowledged.