Investigation of the Tank Model for Urban Storm Water Management

The effect of impervious surfaces in urbanizing watersheds on stormwater runoff volumes and peak flood flows is investigated using a lumped hydrologic model, known as the Tank model, for the urbanized Mimico Creek watershed in Ontario. This model includes a separate algorithm for the simulation of stormwater runoff from impervious surfaces and an algorithm for the simulation of runoff and baseflow generated from pervious areas of the watershed. The simulated daily flow records of the calibrated model matched well with observed historic flow records. Since Mimico Creek is currently at 50% imperviousness; the model to simulate the sensitivity to change in streamflow for both 40% and 60% imperviousness scenarios is demonstrated. This study presents a simple novel management tool for assessing the effect of change in imperviousness of an urban watershed on streamflow volumes and peak flood flows.

Urbanization is an ongoing trend in virtually all nations. High-density urbanization results in significant increase in impermeable surface areas, with resultant flooding problems. However, new urban stormwater management systems have been introduced over the last few decades, known as low impact development (LID) systems. The primary focus of LID systems is to promote infiltration and to decrease the volume of surface runoff and peak flood flows by changing the effective imperviousness.

Various hydrologic models, including the BC Water Balance Model; PC-SWMM, EPA National Stormwater Calculator, WinSLAMM, MIDS GUI Credit Calculator, and GIS-Calculator have been used to investigate the application of LID systems (Yates 1996; Elliott and Trowsdale 2007; Dietz 2007; Dietz and Clausen 2008; Finney et al. 2010; Basri 2013; Saini & Singh 2016). This study investigates the application of a Tank model to assess the effects of imperviousness on urban streamflows. Although the Tank model has been widely used in Asian countries, no evidence of its application in Canada was found. 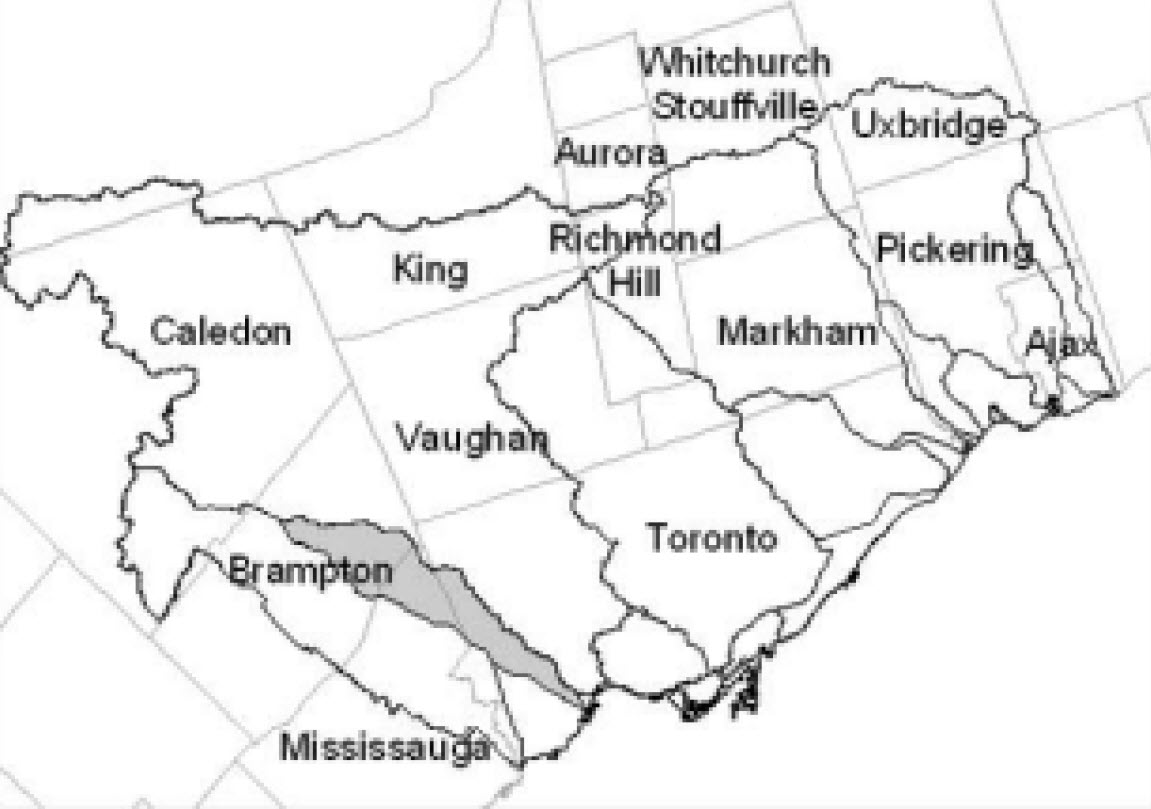 The hydrometric station of Mimico Creek is located in Islington, 5 km away from its mouth, namely 02HC033.

UDFCD (2001) recommends percentage imperviousness values for different types of land use; the selected values are shown in Table 1.

The daily flow data in Mimico Creek hydrometric station at Islington (02HC033) are available from 1965 to 2016, and water level records from 2002 to 2016. In this paper, three years of continuous data were used to calibrate the Tank model, for the period 1990–1992. The observed streamflow data of 2001 were used for Tank model validation.

Precipitation is the only input data for the Tank model. For this research, the daily precipitation data were obtained from Environment Canada. The selected meteorological station is Toronto Lester B. Pearson International Airport, which is near the centre of the study area and 9.18 km away from the hydrometric station, see Figure 2. 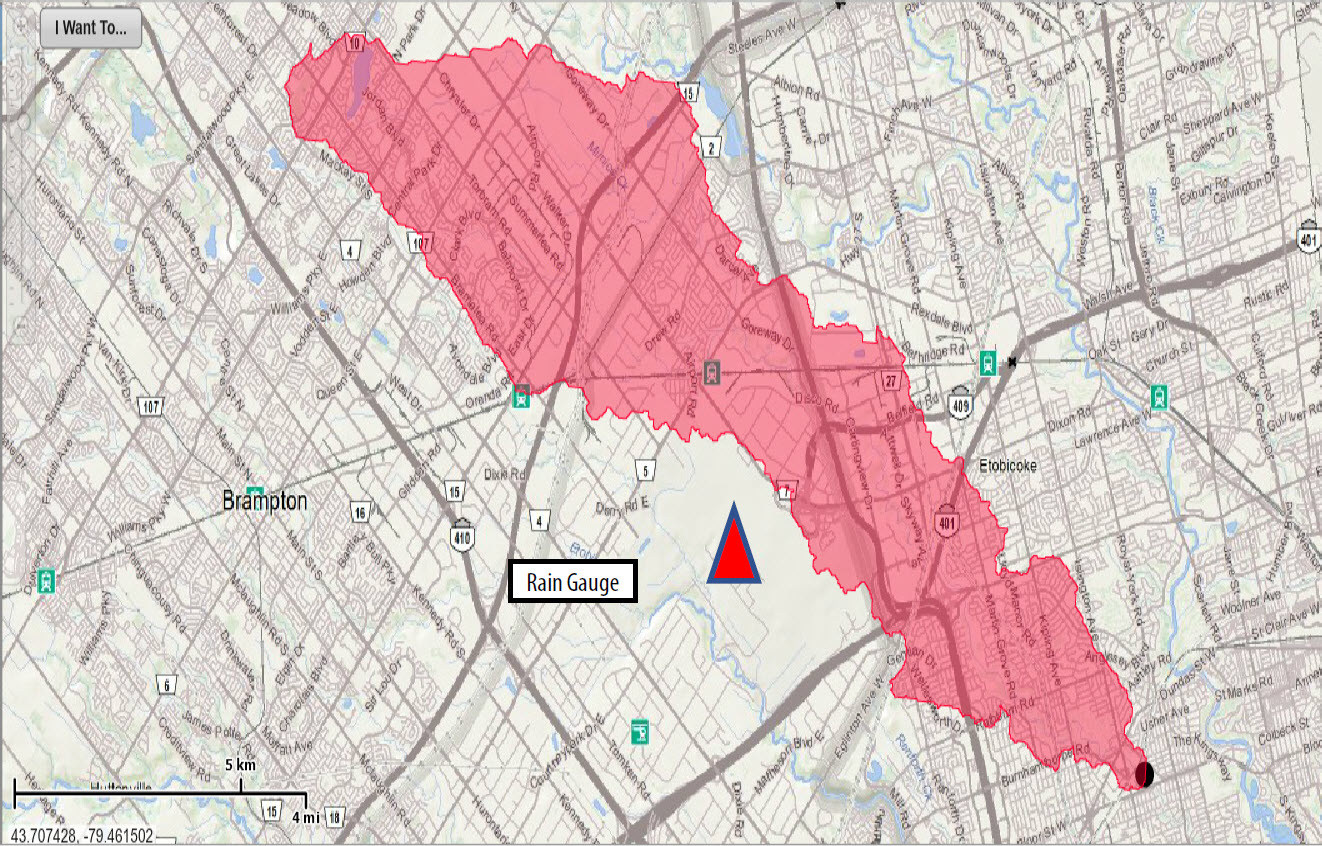 The average annual precipitation for the Mimico Creek watershed is 808 mm. The daily precipitation data for this meteorological station are available from 1953 to 2013, and for this research, the period 1990–1992 was selected to calculate the Tank model input for calibration and sensitivity analysis. The observed precipitation of 2001 was used for the model validation.

The Tank model structure depends on the type of land use. A watershed does not consist of a single type of land use, but consists typically of two or more types. Basri (2013) summarizes how the Tank model structure varies with the land uses, such as urbanized area with only one tank, while garden areas and forest area are with three tanks and four tanks in vertical series, respectively.

There are two side outlets in the top tank, and one in the bottom tank for the permeable model. The outputs from the side outlets are termed runoffs. The output from the bottom outlet of the top tank is the infiltration, which would occur with the onset of precipitation. The principle of the two types of Tank model is to simulate the runoff base flow on the water balance. Chow et al. (1988) summarized the water balance equation for a watershed as shown in Equation 2. The water balance equations and its components of the Tank model for investigation are shown in Equations 2 through 10. Figure 3 presents the schematic diagram of the structure of the Tank model. These two Tank models were built independently, but their simulation results were assigned different weights according to the imperviousness areas of the case study watershed. 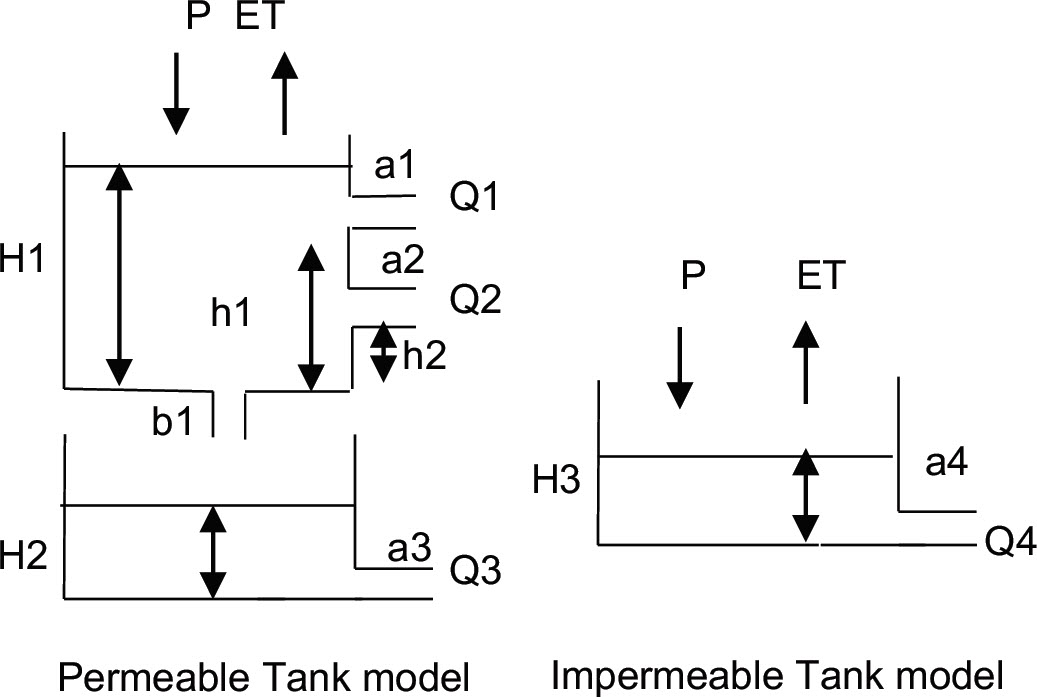 Figure 3 Schematic of the Tank model.

The interpretation of the parameters of the combination Tank model is as shown in Table 2. A spreadsheet was applied to conduct these equations to simulate the runoff.

The parameters of the Tank model were calibrated using the Solver tool of Microsoft Excel by minimizing the root mean square error (RMSE) between observed and simulated daily flow records. Table 3 summarizes the results of the calibrated parameters.

Figure 4 shows the observed and simulated daily streamflows using the calibrated Tank model that shows a good match for a range of large and small storm events that occurred in the year 1991. 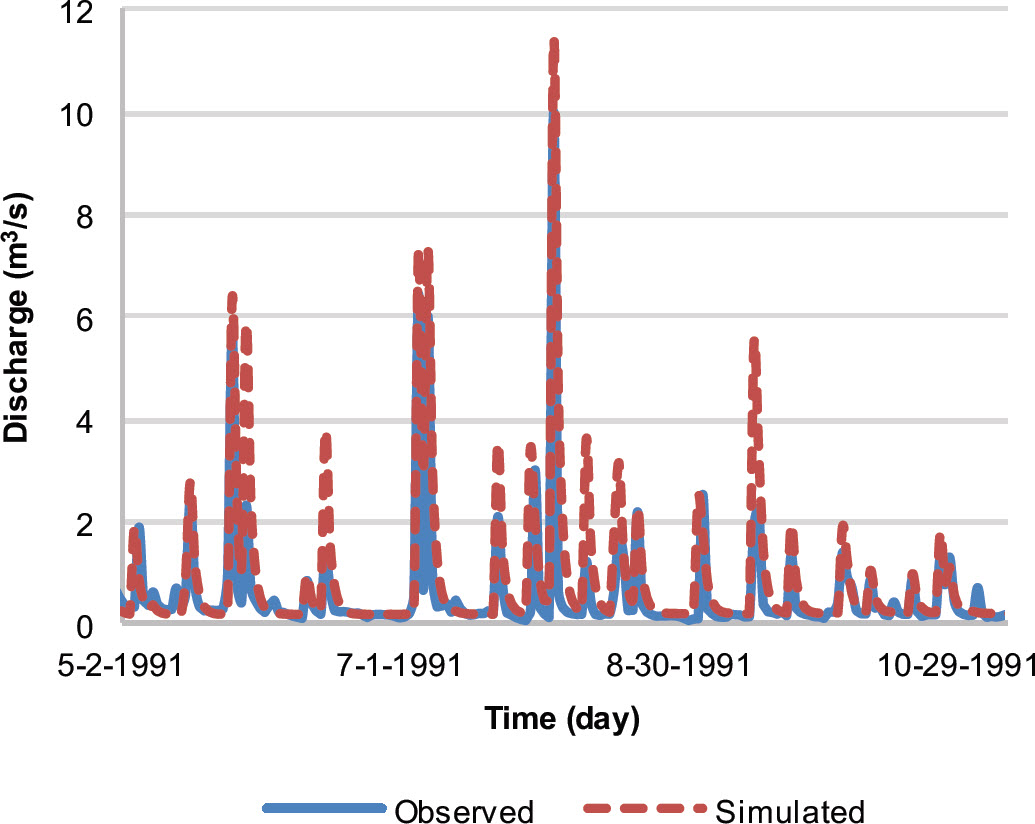 Figure 4 Comparison of simulated and observed hydrograph of the Tank model in 1991. 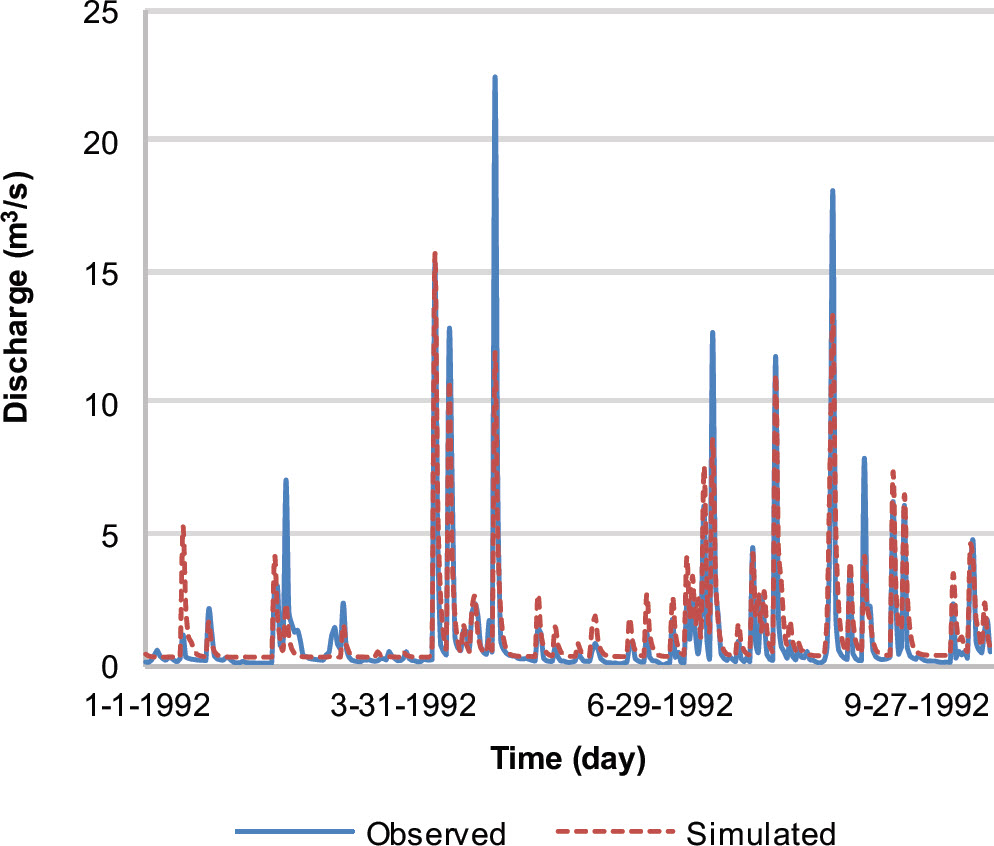 Figure 5 Comparison of simulated and observed hydrograph of the Tank model in 1992.

After the Tank model was calibrated, it was applied to analyse the relationship between the runoff and imperviousness of the urban area. Total runoff volume is one of the important hydrologic indicators, especially for design and retrofit of an urban drainage system with low impact development (LID) technology to increase permeable surface coverage. Table 4 indicates that total runoff volume will decrease from 347 mm to 303 mm if the percentage impervious cover is reduced from 50% to 40%.

Volume is expressed in mm normalized by the watershed drainage area (70.6 km2).

Another important hydrologic indicator is peak discharge. The accurate prediction of peak discharge can effectively prevent property damage and protect the lives threatened. The values in Table 5 are the simulation results of the mean daily flood peaks varying with imperviousness during the period 1990–1992. The mean daily flood peaks will decrease significantly if thepercentage impervious cover is reduced from 50% today down to 40% through the implementation of permeable pavers and other LID systems to increase permeable surface coverage.

Table 5 Mean daily flood peaks variances with imperviousness from 1990 to 1992.

A hydrologic model, known as the Tank model was used to investigate the effect of imperviousness on stormwater runoff volumes and peak flood flows. The Tank model includes algorithms for the simulation of stormwater runoff from impervious surfaces and both runoff and baseflow generated from pervious areas of the watershed. The model was successfully calibrated and tested, using historic records, for the case study watershed of Mimico Creek, Ontario for simulating daily flows.

Mimico Creek watershed is currently at 50% imperviousness; however, the calibrated Tank model was used to investigate two very different future imperviousness scenarios. First, the implementation of extensive LID systems (e.g. porous pavements, green roofs and infiltration galleries) to reduce imperviousness down to 40%, which would reduce mean annual streamflow volume by 12% and drop the peak flood flows by 25%. Second, continue urbanization under a business-as-usual scenario to 60% imperviousness, which will increase runoff volumes by 4% and peak flood flows by 8%.

In conclusion, the Tank model is a simple management tool for preliminary investigation of the potential effect of an increase or a decrease in the imperviousness of urbanizing watersheds on both runoff volumes and peak flood flows, in support of the implementation of low impact development technologies to protect the health of urban streams and their aquatic life.

The authors would like to acknowledge the support of the Natural Sciences and Engineering Research Council of Canada (NSERC) for their support of this research.