A model of sewer ventilation was developed using a relationship between the water and air velocities. SWMM hydraulic output was used to compute the water velocity and flow depth. The flow depth is used to compute the headspace area. In conjunction with the calculated air velocity this allows the air flow rate to be computed. The model was calibrated and validated using five studies that included data from collection systems in four cities, plus two experimental setups. The results showed that the model was able to reasonably reproduce the measured data over a large range of air flow rates—from <10 m3/h to 5 000 m3/h.

In the design of sewer systems (specifically sanitary sewers at this point, since combined systems are no longer constructed) there is typically little design attention paid to air movement. Yet air movement is one of the determining factors in odour and corrosion problems (Koe and Brady 1986). Odour problems can be a major issue for system owners and can be difficult to fix (e.g. City of Los Angeles 2011). Pipe corrosion causes huge maintenance issues and expense (e.g. Sydney et al. 1996).

An overview of the mechanisms effecting the air movement in sewers is given by Edwini-Bonsu and Steffler (2006) and Lowe (2016). The main mechanism is friction drag between the air and water, causing the air to move in the same direction as the water. However there are many complicating factors that make the computation of sewer ventilation rates challenging. Some of these include:

However sewer systems have thousands of connections to the ambient air; via manholes, for example. Each manhole presents a unique air pressure boundary condition. Studies have shown the importance of pressure variations at manholes in effecting local system air flows (WERF 2009; Parker and Ryan 2001). At present there are no methods available to reliably predict manhole pressure variations.

So while recognizing some of the complicating factors listed above, it is still important to realize that friction induced air flow from the water will still be the main mechanism. It is therefore this phenomenon that is the focus of this paper. Specifically this paper looks at using the USEPA Storm Water Management Model (SWMM) to provide the key hydraulic inputs necessary for the air flow rate calculation.

The main objective of the study was to develop a model to compute sewer air flow rates based on SWMM hydraulic output. The first step was to develop a relationship between the sewer hydraulics and air flow based on actual field measurements. This can be thought of as the model calibration. Once calibrated the model could then be validated against other data from different systems.

The data used for model calibration was based on an extensive study by Parker and Ryan (2001). The study was conducted over 11 km of the Ottawa–Carleton sanitary sewer system with pipe sizes ranging from 0.61 m to 2.1 m (24 in. to 84 in.). This study was chosen as it spanned a large range of both water and air flow rates. Water flows at the head end of the system were 0.09 m3/s and increased to 0.71 m3/s by the last reach. The physical characteristics of the system are summarized in Table 1.

As expected with such a limited and scattered dataset the correlation is modest (R2 = 0.62). This, however, is typical of field sewer ventilation data. The real question was how air flow rates based on this relation would compare. 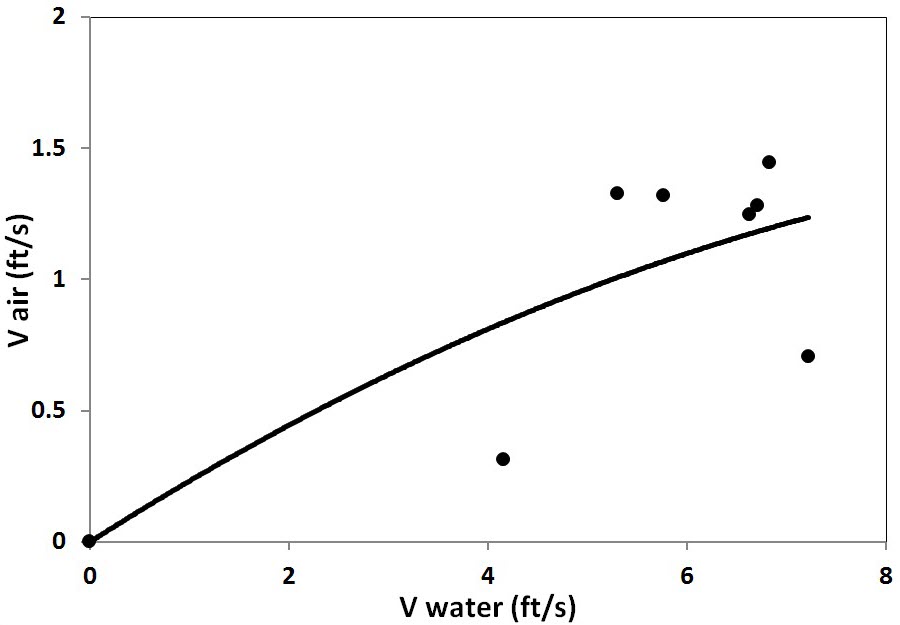 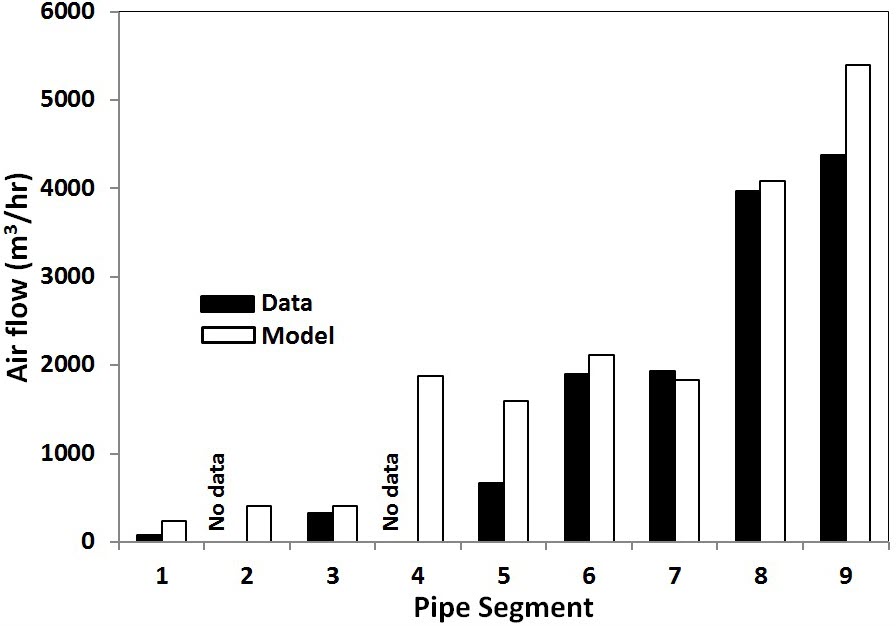 The results shown in Figure 2 look surprisingly good given the modest air to water velocity relationship they are based on. Figure 3 shows the percentage error (%error), calculated as:

This brings up the question: what exactly is a good result and how should the results shown in Figures 2 and 3 be interpreted?

Perhaps the first item to discuss in relation to this question is expectations. For all of the reasons mentioned previously in Section 1, it is not realistic to expect that airflow rates will ever be predicted with the accuracy of the system hydraulics. In discussions with engineers there seemed to be a general notion that any prediction within a factor of two would be considered good, considering that there is essentially no predictive capability available at all at the present time. This would be an error of ±100%.

In a sewer ventilation study conducted by the Water Environmental Research Foundation (now the Water Environment & Reuse Federation, WERF 2009), numerical models were compared to measured results. The best model was an empirical model which had an average error of 103%. The average error from Figure 3 is 61%, and the median error is 23%. So in the context of WERF study, and the rule of thumb mentioned above, this seems like a good result. However this is the model calibration—the real test of prediction is the validation stage that follows. 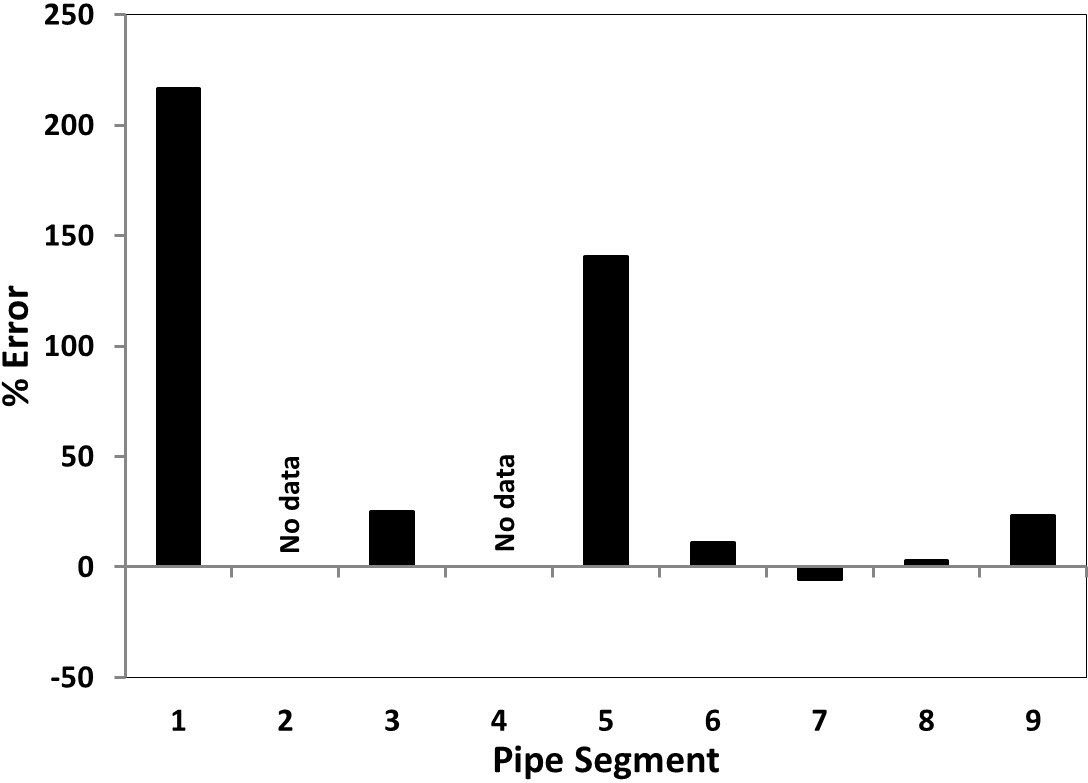 Using this as the starting point the model was then applied to other datasets to see how it compared. This was the model validation phase.

The model developed above was tested using data from four separate studies. The first two studies were a series of experiments. The next two used data collected from sewer systems in three cities: Seattle, Los Angeles and Toronto. Combined, these studies had air flow rates that ranged from <10 m3/h to >10 000 m3/h.

A laboratory based experimental study was conducted by Pescod and Price (1982) to examine the effect of liquid drag on air flows using a 0.3 m (12 in.) diameter pipe. The test details, as supplied in their paper, are given in Table 2. 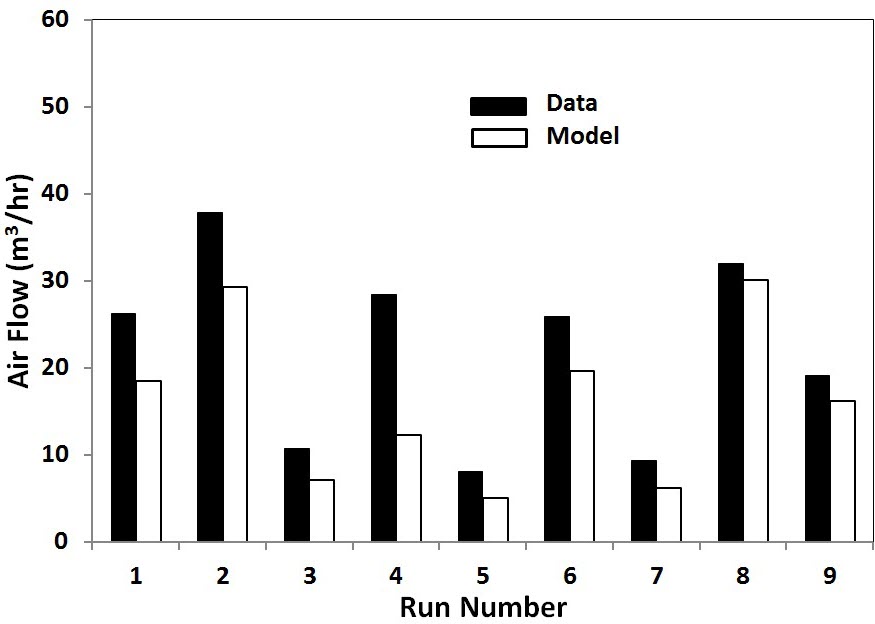 The % error is shown in Figure 5 (where possible a standard axis of ±100% will be used in all error plots to facilitate direct comparisons). In this case the model underpredicted every run but only once did the error exceed −50%. The average error was −29% and the median error was −30%. 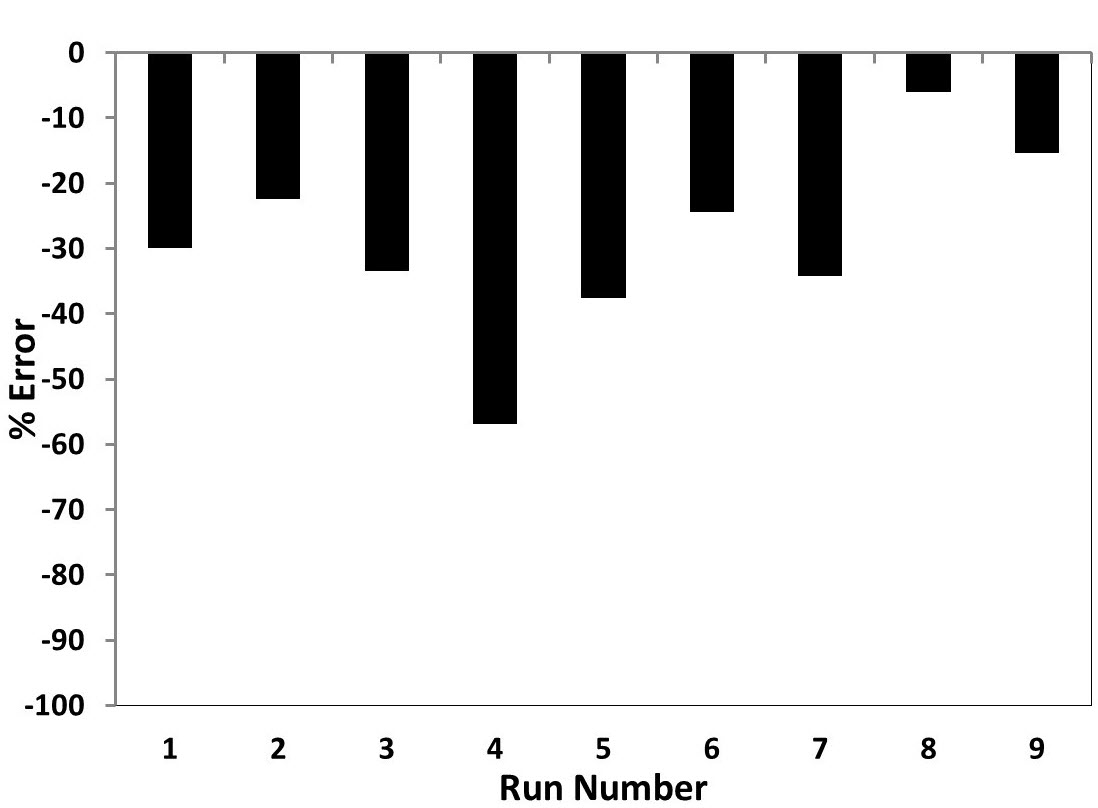 Koziel, Corsi and Lawler (2001) conducted experiments on a 61 m (200 ft) long pipe with a diameter of 0.2 m (8 in.). Although the focus of this study was VOC emissions, air flow rates were also measured. Some of the experiments forced the air counter to the water flow. These were not modeled. Details of the experiments, as given in their paper, are given in Table 3.

A SWMM model of the system was developed and used to calculate air flow rates. The results are shown in Figure 6. As before the model agreement is reasonable. Also as before the flow rates are much lower than those used in the calibration. 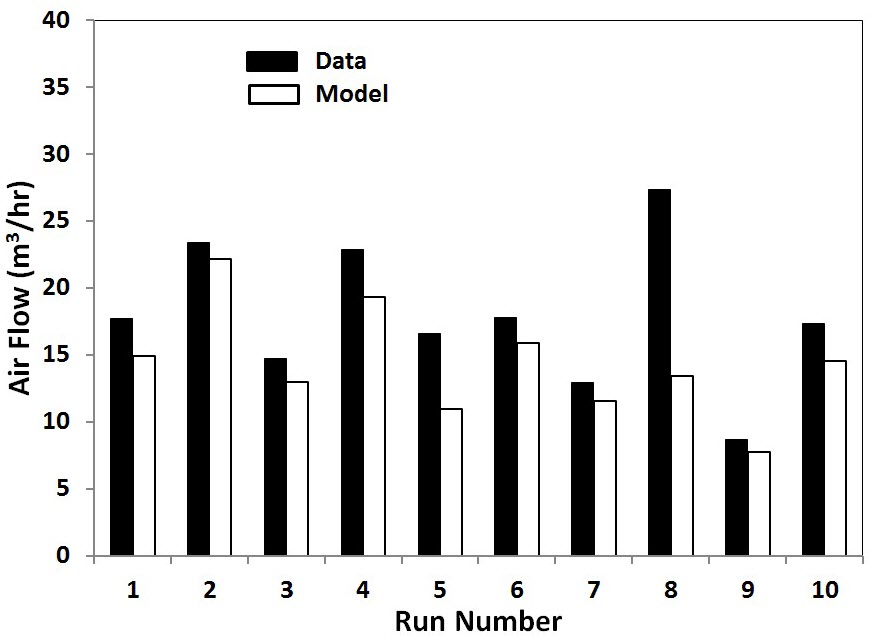 The model performance is shown in Figure 7. As with the previous case the model underpredicted every run. The maximum error was −50%. The average error was −18% and the median error was −14%. 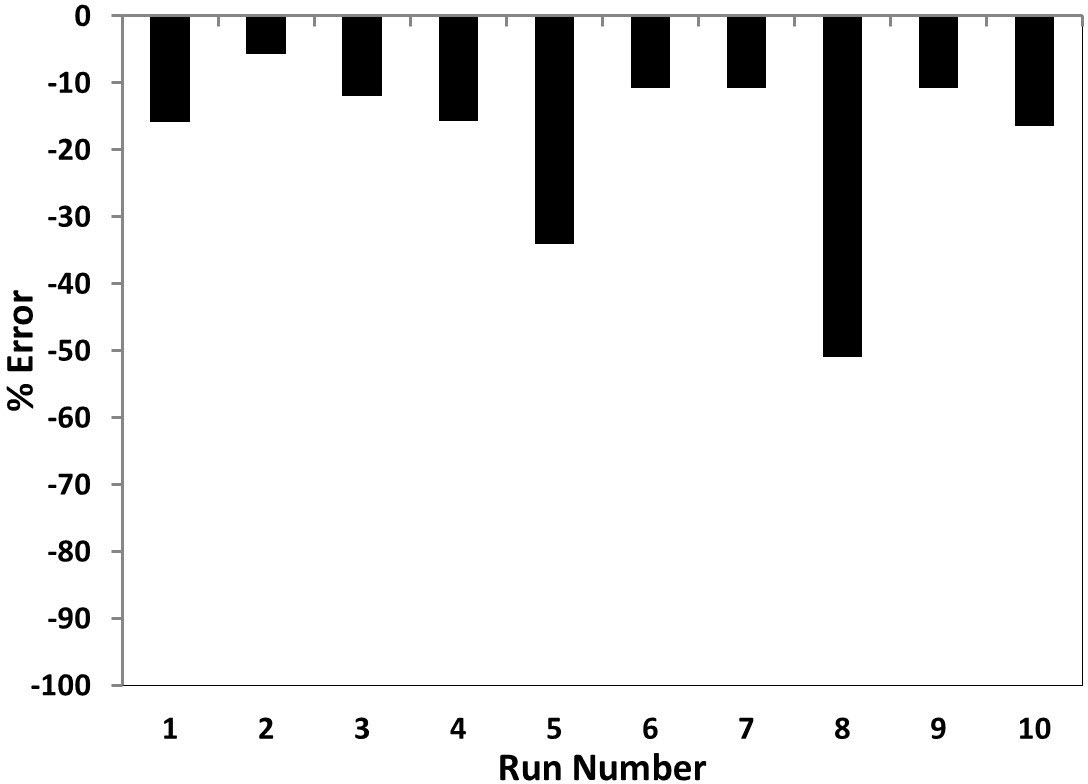 The Water Environmental Research Foundation (now the Water Environment & Reuse Foundation, WERF) conducted a series of air flow rate experiments at four locations within the King County, Washington (Seattle area) and Los Angeles County wastewater collection systems (WERF 2009). The details of the four systems, as given in the report, are in Table 4.

Table 4 Details of the WERF study.

The SWMM based model results are shown in Figure 8. For the Torrance and Renton locations the model results look reasonable. The model overpredicts the North Seattle and West Covina locations. Both of these sites stood out in the WERF study as having large water velocities but small air velocities.

At the West Covina location there was an air flow restriction noted in the report, the cause of which was unknown. As the model has no restrictions in place it not surprising that it significantly overpredicts the flow rate.

The North Seattle location was unusual in that the upstream end of the measured reach was the end of a force main. Apparently the pump cycling caused frequent air flow reversals after the pump switched off. This reduced the net air flow rate and resulted in the small average number that is shown (~85 m3/h). Again none of this was incorporated into the model and so it is not surprising the model overpredicts the flow rate here. 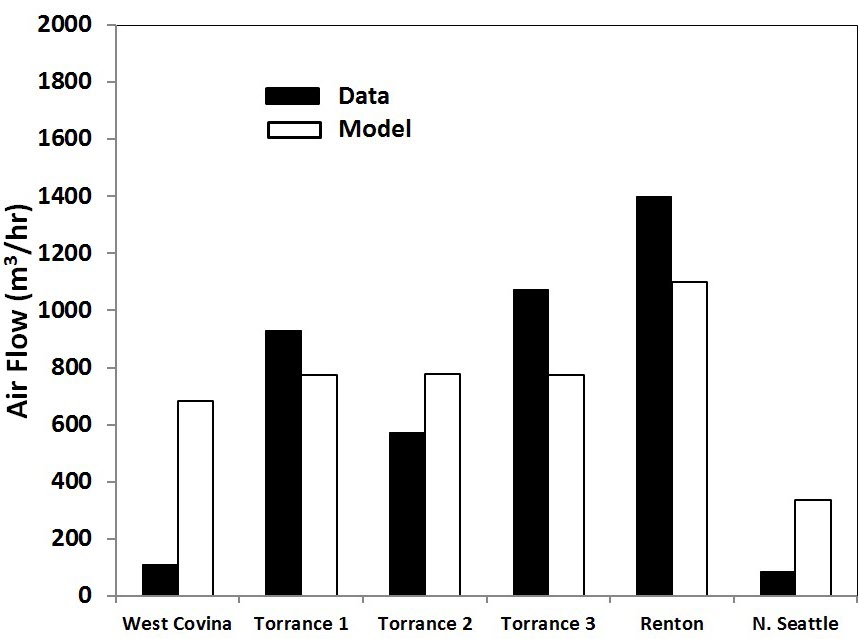 The model performance shown in Figure 9. The two outliers are noted. The other sites had good results—within 50% error. The average (absolute) and median (absolute) results for all sites was 153% and 32%. If the outliers are removed the average and median results are both 25%. 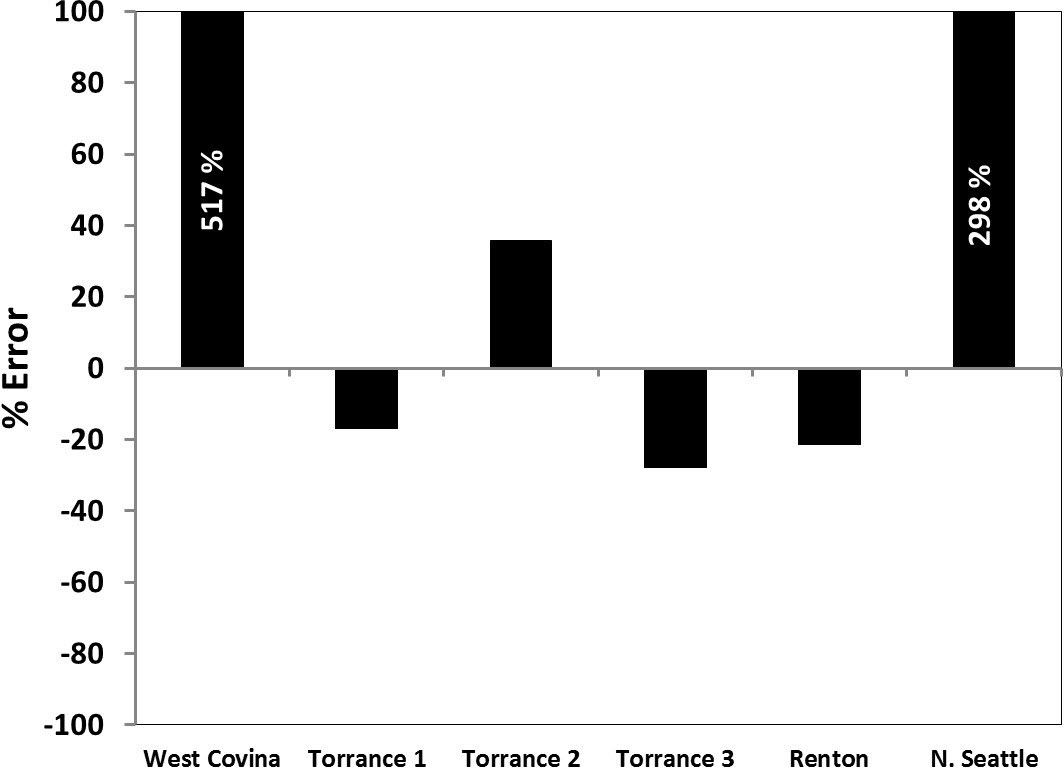 A 1995 study was conducted on a large sewer interceptor in Toronto (Quigley and Corsi 1995). The details of the system, based on their paper, are given in Table 5. The typical midday flow in the study was 0.2 m3/s and the flow depth was 20 cm to 25 cm. 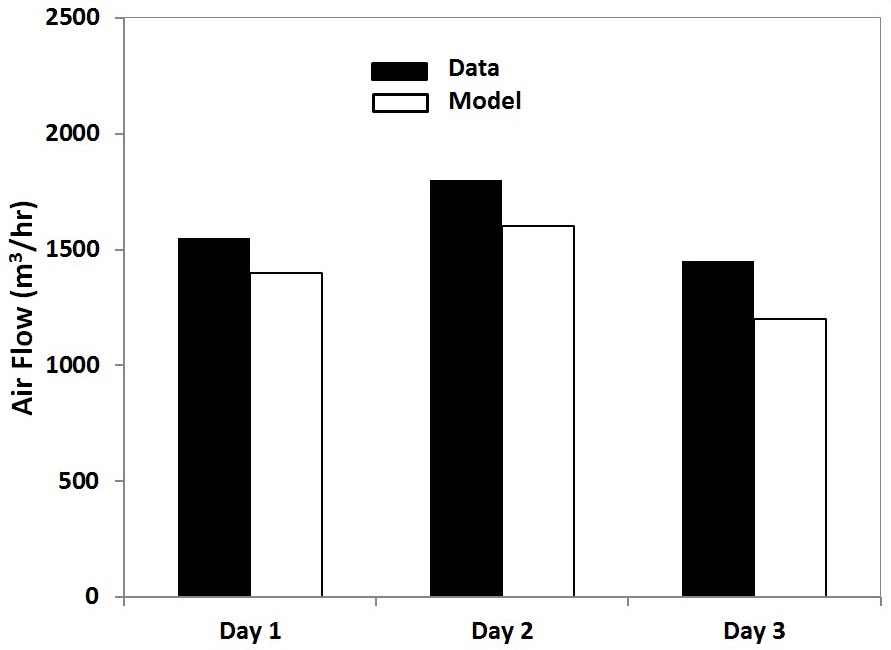 The model performance is given in Figure 11. Again the model underpredicted on each day, but was always within 20%. The average and median errors are −13% and −11%. 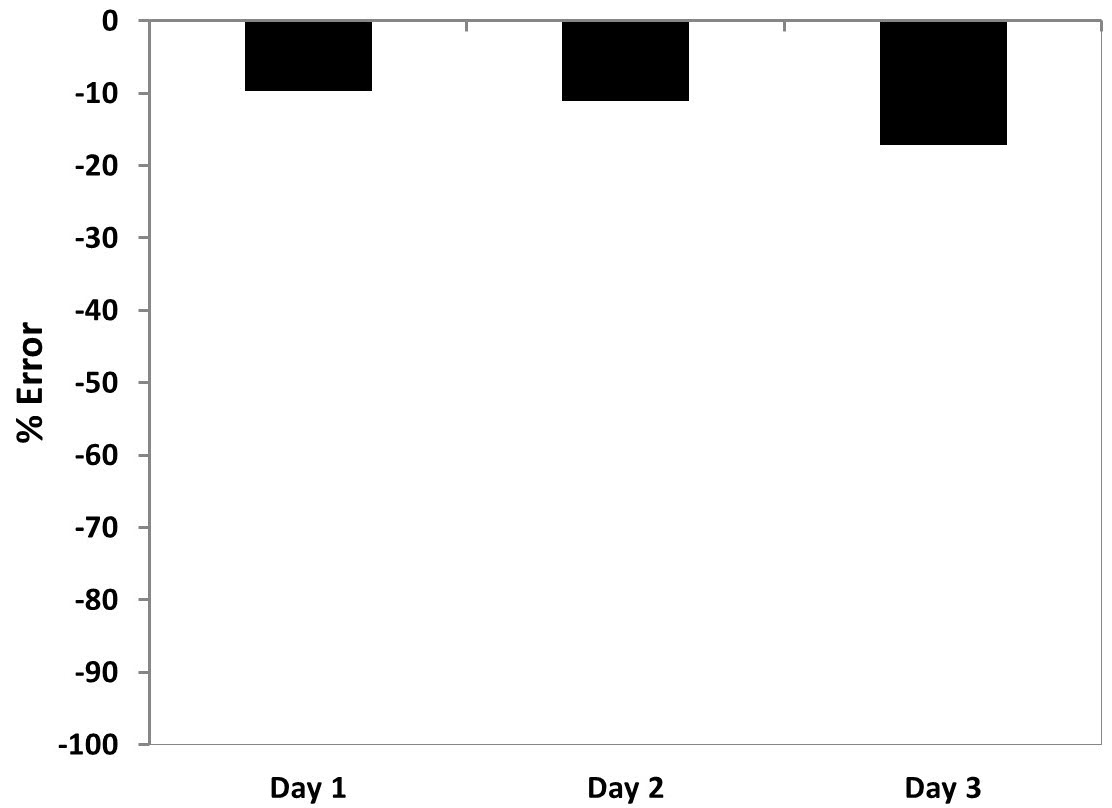 3.5 Summary of Calibration and Validation Results

The results of both the calibration and validation are encouraging. The calibration and validation results showed that the model could reliably reproduce the measured air flow rates in nearly all cases. The model was able to compute values over a large range of air flow rates, from <10 m3/h to >5 000 m3/h. The results of all the model runs are shown graphically in Figures 12 and 13 below.

Figure 12 highlights the large range used in the model validation, to the point where the smaller results are not even visible on the chart. The same results are plotted on a logarithmic axis in Figure 13, where all the results can be seen more clearly. 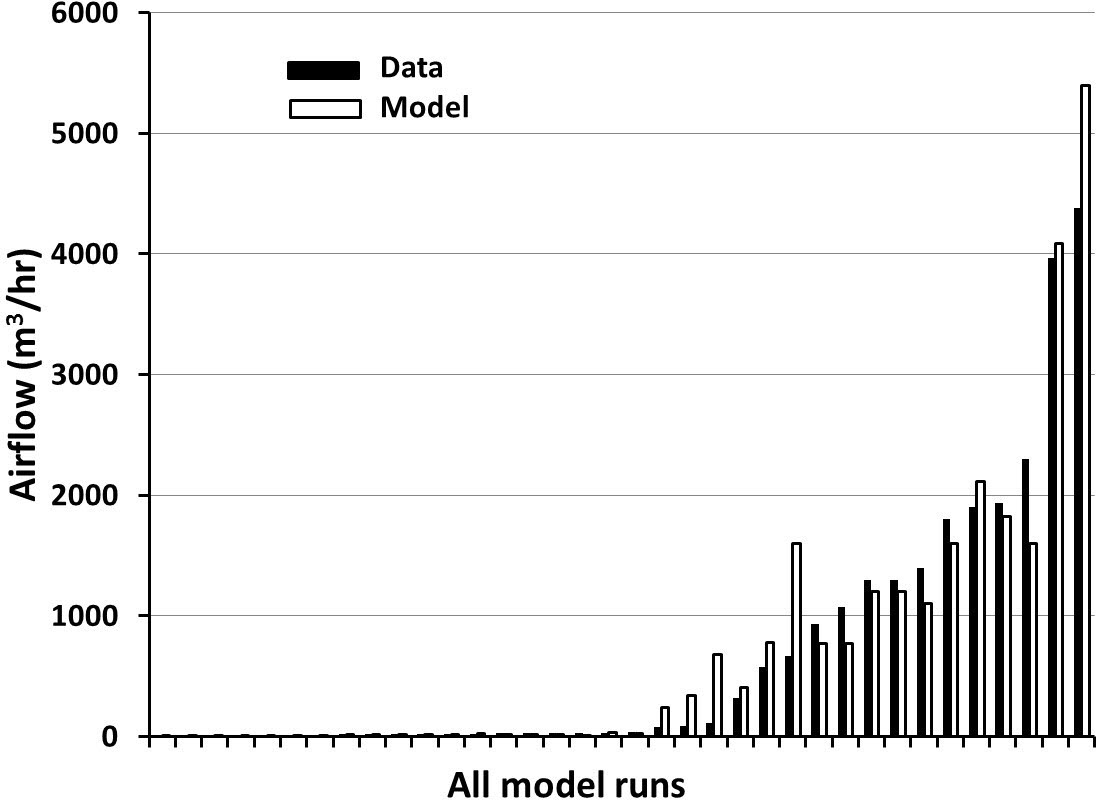 Figure 12 All model results on a linear axis. 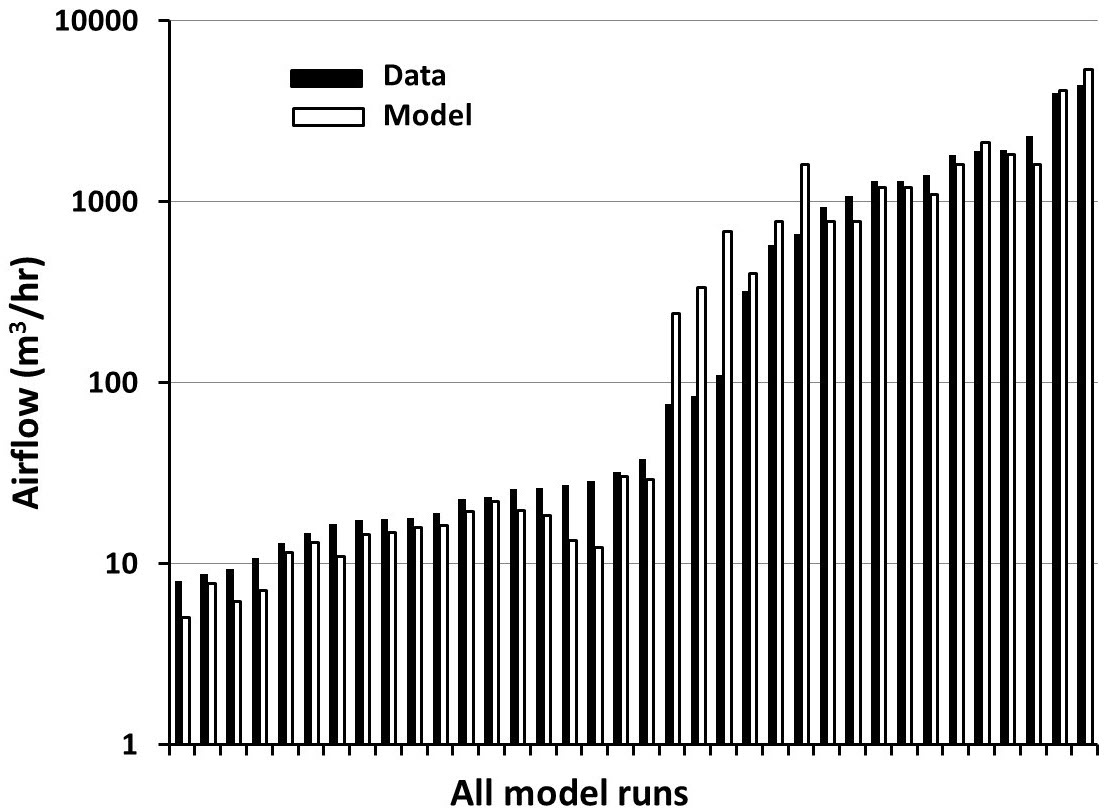 Figure 13 All model results on a logarithmic axis.

In this case the inflow–infiltration (I/I) for the system was based on a small percentage of a Type II, 6 h design storm of 10 cm (4 in.) entering the system. The air flow rates at the peak system hydraulic flows are shown in Figure 15 below for various reaches. The air flow rates generally increase through the system, with increasing water velocities and increasing headspace in the larger pipes. However, from section to section there are also frequent decreases in air flow rates, reflecting local changes in slope or water velocity.

When air flow decreases from one section to the next, the excess air is vented at the nearest manhole (MH). The MH venting locations and rates are shown in Figure 16 below. 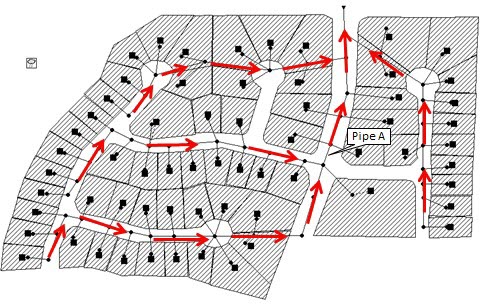 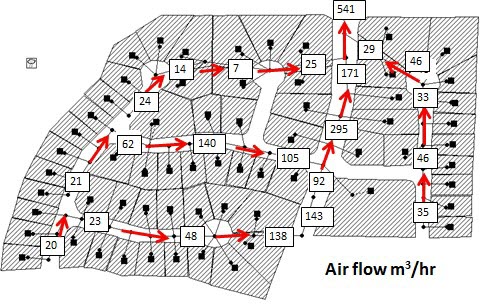 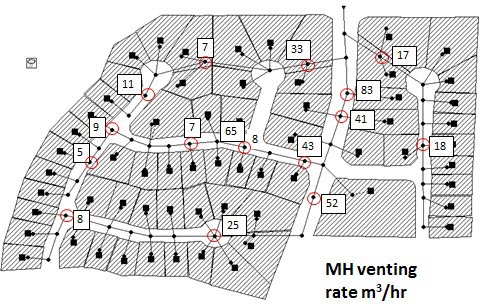 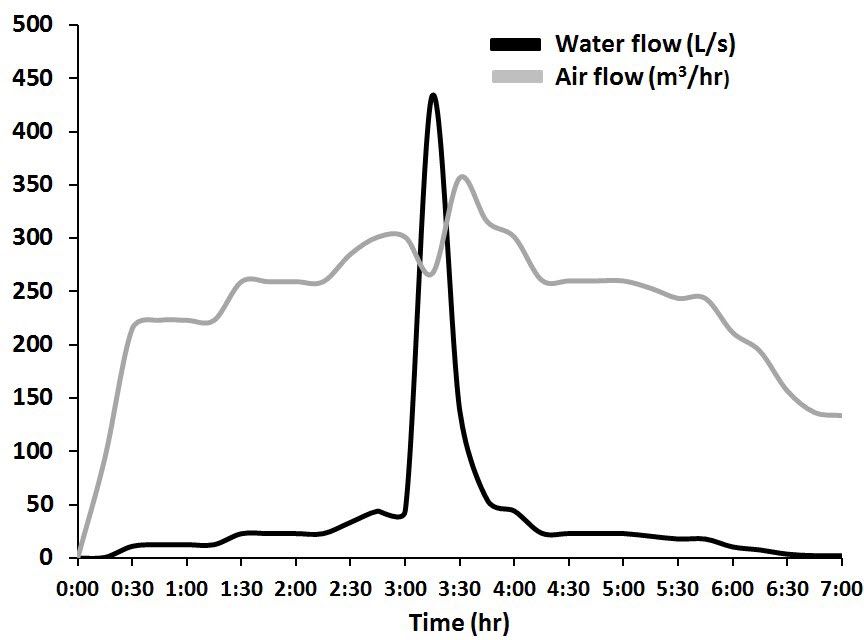 Figure 17 Time variable air and water flows in pipe A. 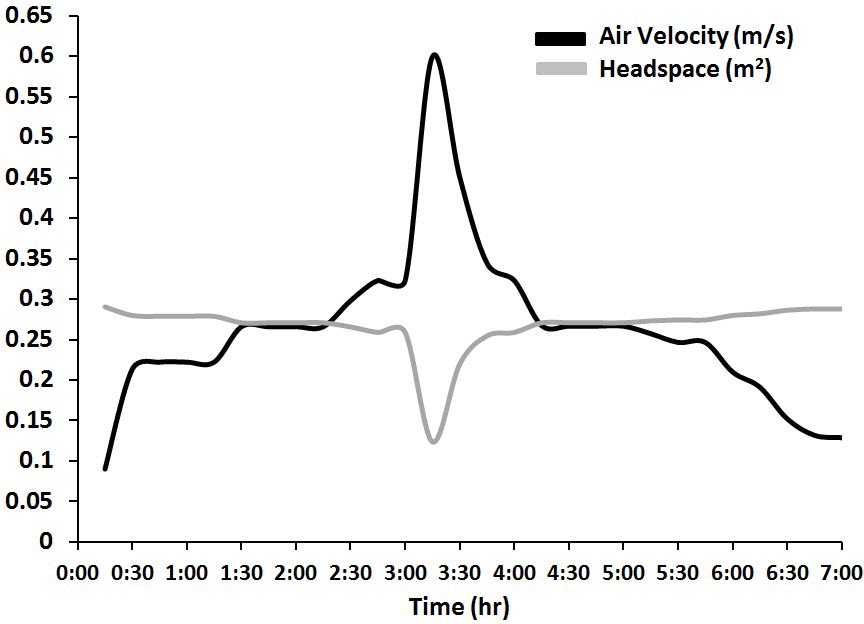 Figure 18 Air velocity and headspace in pipe A.

The analysis of odour or corrosion in sewer systems involves two components: air flow rates and concentrations. This paper deals with the first component, the calculation of sewer air flow rates.

The model was then validated using four studies, two of which were experimental, and two using real sewer systems. The real systems included Los Angeles, Seattle and Toronto. The validation results were actually better than the calibration results, with the model usually with 30% of the data.

Paper and publication copyrights are summarized here. JWMM content can be downloaded, printed, copied, distributed, and linked-to when providing full attribution to both the author/s and JWMM.