The United States Environmental Protection Agency’s System for Urban Stormwater Treatment and Analysis Integration (SUSTAIN) software program is a GIS based decision support system to help development, evaluation and selection of optimal green stormwater infrastructure (GSI) combinations on the basis of cost and performance. SUSTAIN’s best management practices siting tool (BST) supports the selection of suitable GSI locations that meet user defined site suitability criteria. This paper describes SUSTAIN applications for mapping and modeling GSI. A case study is presented from a recent project in Allegheny County, Pennsylvania in which SUSTAIN BST was used along with other computer programs for a county-wide GSI planning project for combined sewer overflow control.

Stormwater management systems in many cities are inadequate and based on old paradigms which collect and transport stormwater flow to a downstream outfall or treatment facility. This approach increases flooding problems, causes sewer overflows and results in deteriorated water quality in receiving waters.

A stormwater best management practice (BMP) is a stormwater management facility or activity used to protect, maintain, reclaim or restore the quantity and quality of receiving waters and the designated water uses. BMPs increase infiltration, decrease runoff, and improve water quality. There are two types of BMPs: structural BMPs are constructed facilities, such as rain gardens and porous pavement; non-structural BMPs are activities such as planting trees and street cleaning.

Stormwater low impact development (LID) controls are new sustainable development practices and BMPs designed to capture stormwater surface runoff using some combination of detention, infiltration and evapotranspiration. As a means to reduce volume entering a stormwater or wastewater system and reduce its peak flows, LIDs can be applied through source controls to infiltrate, evapotranspirate or store stormwater runoff for beneficial uses. These approaches prevent stormwater runoff from entering a sewer system and reduce overflows (Shamsi 2010, 2011). Rain gardens and porous pavement are examples of LID controls.

Gray infrastructure is defined as traditional brick, mortar and concrete construction to remove stormwater from its source and transport it to a downstream outfall or treatment facility. Sewers, deep tunnels  and storage tanks are examples of gray infrastructure. Green stormwater infrastructure (GSI) is defined as the specific sets of source controls that use natural processes to reduce the volume of stormwater entering the sewer system. The same as LIDs and structural BMPs and also referred to as sustainable infrastructure, GSI is designed to capture surface runoff close to its source at distributed (decentralized) locations (Michael Baker Corporation 2008). Rain gardens or bioretention, subsurface infiltration, green roofs, porous pavement and street planter boxes are common GSI examples (Trimbath and Shamsi 2013). Rain gardens, street planters and green roofs (Chen and Li 2011) are all variations of bioretention cells. To avoid confusion, GSI is used as an all-inclusive term for all sustainable structural BMP and LID technologies.

While interest in the application of GSI has increased recently, there is little hard data, and less in the way of engineering assessment tools available to water resources engineers to facilitate an area-wide evaluation of GSI for comparison to conventional gray wet weather control technologies. In the absence of well-defined regional GSI siting methodologies, engineers are hard pressed to develop alternatives or render opinions on green versus gray infrastructure in routine practice, particularly in a regulatory context which requires compliance with enforceable orders (Lennon et al. 2013).

GSI implementation planning requires the mapping and modeling of existing gray infrastructure and GSI retrofits. Hydrologic and hydraulic (H&H) modeling can be used to verify and quantify the GSI benefits and to design appropriate LID controls (Behr and Montalto 2009). GSI modeling can be done using SWMM5 and PCSWMM software (Shamsi 2010, 2012; McCutcheon et al. 2012); WinSLAMM, from the University of Alabama (Tuscaloosa, Alabama) is another GSI modeling software program (Pitt and Voorhees 2011).

SUSTAIN is designed as an integrated mapping–modeling package to support geographic information system (GIS) mapping and linkage to other related models such as detailed sewer system models (e.g. SWMM) or receiving water models of affected rivers. Where existing sewer and watershed models are available, SUSTAIN can be used to predict the most inexpensive GSI practices that will result in reduced overflow volumes and frequency. 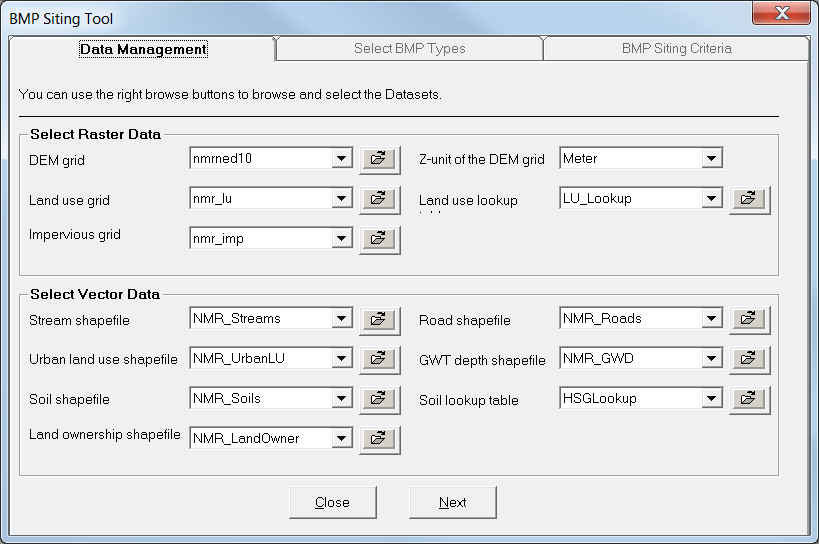 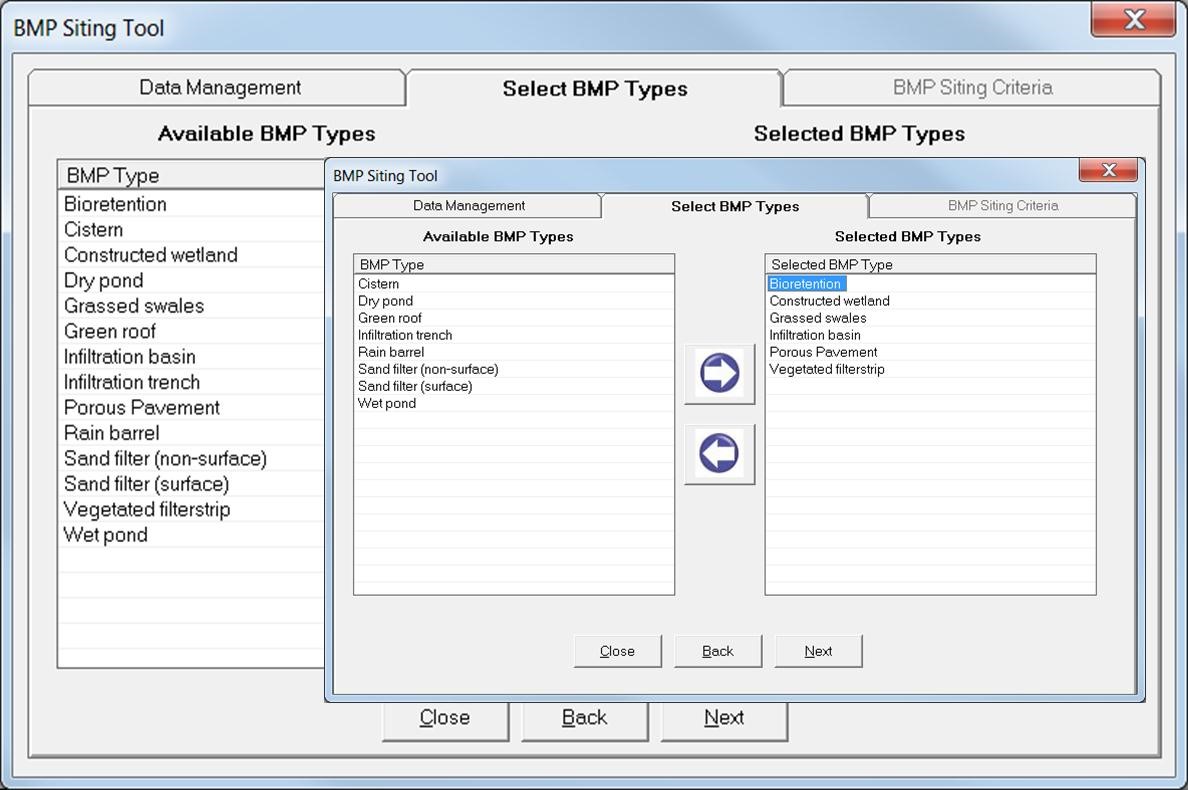 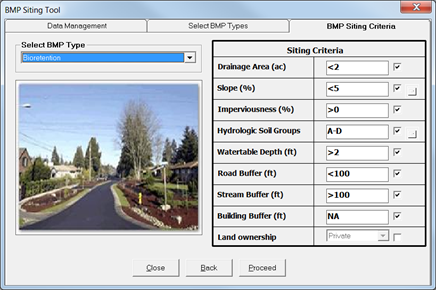 Allegheny County Sanitary Authority (ALCOSAN) provides wastewater treatment services to approximately 900 000 people in 83 Allegheny County communities including the city of Pittsburgh. The location map is shown in Figure 4. The 83 communities own and operate their own collection systems but discharge to interceptor and treatment facilities owned and operated by ALCOSAN. Located along the Ohio River in Pittsburgh’s Northside, ALCOSAN treats an average of 200 000 000 gallons (760 000 m3) wastewater daily. ALCOSAN is not a county agency but a joint city–county authority operating under state guidelines and receiving no tax monies, with revenues generated solely by rates. 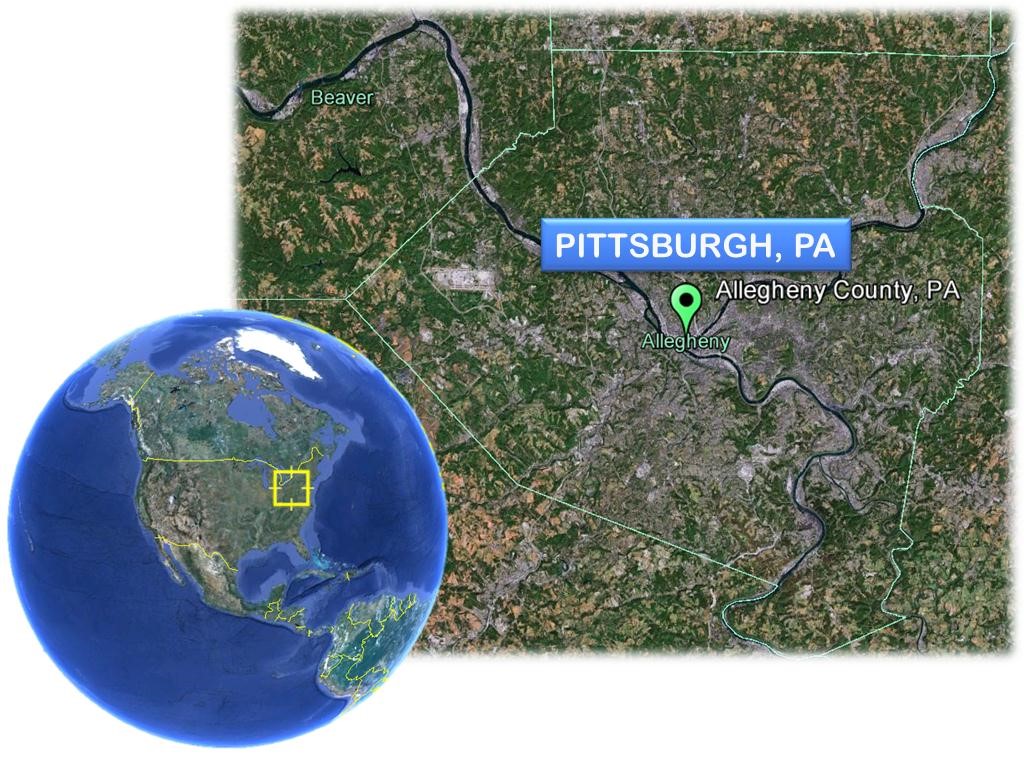 In July 2012, ALCOSAN released its draft Wet Weather Plan for public comment to address sewer overflows in accordance with its federal consent decree mandate. The plan included construction of deep storage tunnels and expanded treatment facilities to capture and treat 5 400 000 000 gal (20 000 000 m3) raw sewage and stormwater overflows a year. With a $2.8 billion implementation cost, this plan represented one of the largest wet weather planning projects in Allegheny County, and the single largest infrastructure project in the Pittsburgh region. The draft plan was met with public demands for use of green infrastructure as an alternative to the gray technologies proposed in the plan. The final plan, identical to the  plan was released in January 2013. However, at the same time, ALCOSAN requested an 18 month extension to study the feasibility of source control and green infrastructure to address the feedback received at public meetings.

ALCOSAN communities had already evaluated conventional gray alternatives and would undoubtedly pursue the gray options as opposed to green solutions, absent the availability of green feasibility and cost analyses to the same level of effort and detail as those for the gray infrastructure. To help the ALCOSAN combined sewer communities with GSI planning, 3RWW conducted a study in 2012–13 to develop a methodology utilizing existing public domain software (SUSTAIN and RainWays) to assess the development of a candidate list of site specific GI projects. SUSTAIN BST was used to conduct a macro scale (watershed level) analysis to support the micro scale (site level) analysis of GSI by the RainWays program.

The analysis started by sub-dividing the 309 mi2 (800 km2)study area covering 83 municipalities into seven planning basins, shown in Figure 5. The boundaries of these basins are based on watersheds and the ALCOSAN Wet Weather Plan. 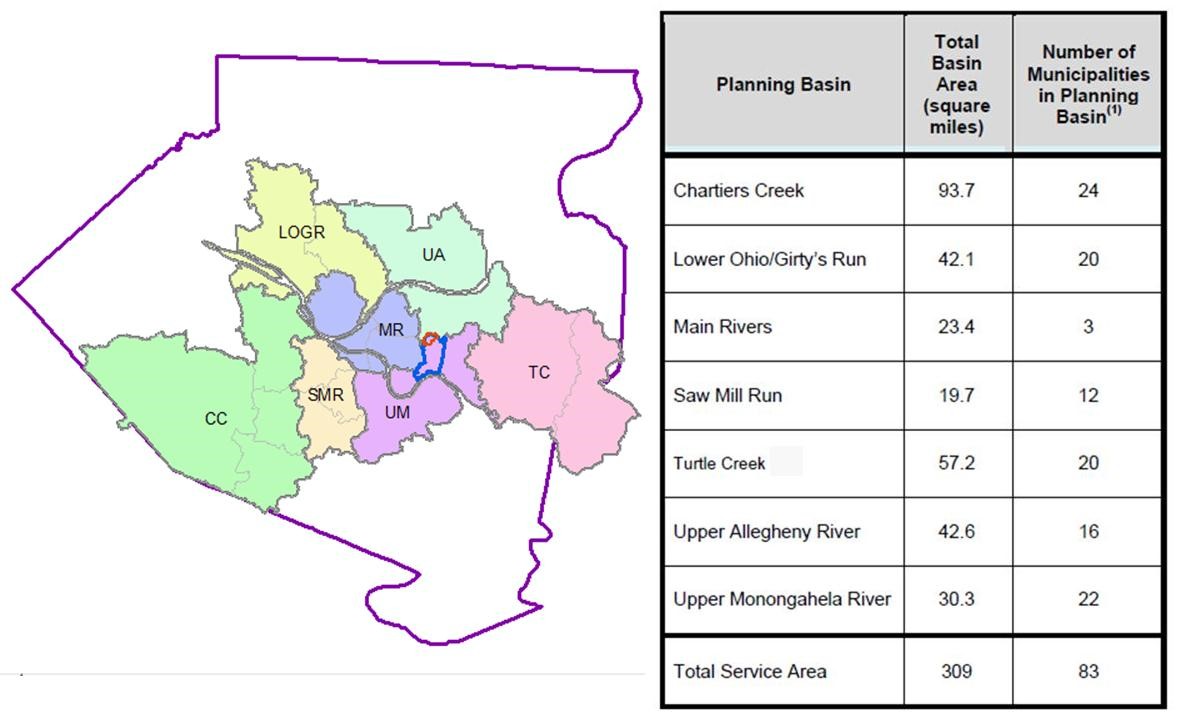 SUSTAIN BST setup needs extensive input data for the required GIS layers. Obtaining or creating these layers with appropriate resolution and attributes is a challenging task for GSI analysis. Table 2 presents a listing of the GIS data and sources used in the BST siting analysis.

* Original data enhanced for this project.

SUSTAIN BST can analyze up to fourteen types of GSI technologies as was shown in Table 1. Based on their relevance in study area, some of these 14 GSI types were not included in the GSI siting analysis. The remaining GSI types were consolidated into the following six broader GSI categories considered more appropriate for an area-wide assessment. 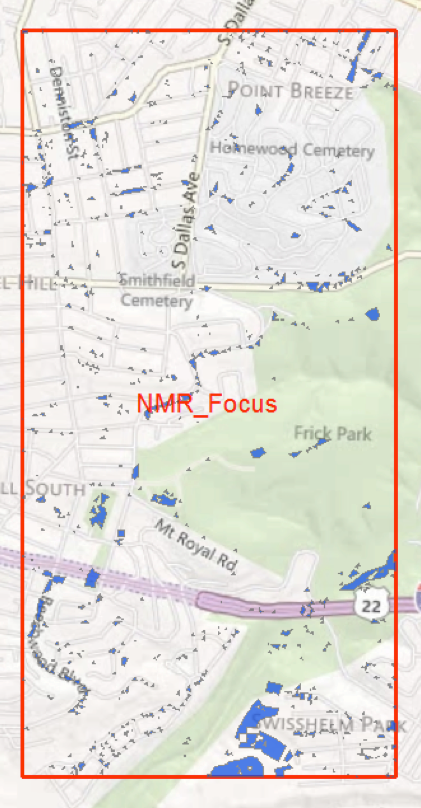 As of early 2013, detailed engineering analysis and the RainWays modeling described below had been completed for the following four test combined sewersheds:

Utilizing the project-specific revised GSI siting criteria (Table 3) yielded a mapping of thousands of potential GSI features (GIS polygons) in these sewersheds, depicting locations where all siting criteria were met for the GSIs under consideration. As part of the detailed engineering analysis, these raw GIS features were screened (based on knowledge of the area and engineering judgment) to eliminate infeasible GSI locations, retaining only the most practical ones. For example, proposed bioretention locations with existing trees were eliminated to preserve the trees. The GSI features were subsequently consolidated into few hundred implementable conceptual GSI projects. Figure 7 shows a sample engineering analysis map of the Nine Mile Run sewershed area, showing GIS features and GSI projects.

GSI projects were then evaluated using the RainWays application to establish tributary drainage area, to size the GSI facility to capture the first inch of tributary runoff, to estimate effectiveness of annual volumetric runoff reduction, and to estimate cost. RainWays analysis is presented in the next section.

RainWays is a Web-based GSI assessment and planning application developed by TetraTech Inc. for 3RWW. It is an Allegheny County specific GSI tool for the ALCOSAN service area that includes both an individual lot based Property Owner’s tool and a project site level Engineer’s–Planner’s tool.

Running inside a Web browser, the application has an easy-to-use intuitive interface. RainWays is designed to allow a user to select a location and assess the implementation of various GSI technologies based on local geography, soils and level of control desired. It assesses stormwater reduction effectiveness in terms of runoff volume for a user designed rainfall amount. Figure 8 shows a screenshot of RainWays Engineer’s–Planner’s tool. RainWays is a free application that can be used from the 3RWW Web site. No software download is required. Use of RainWays is limited to 83 ALCOSAN municipalities.  RainWays, rather than SUSTAIN, was used for GSI modelling because it was easier to use and did not require ArcGIS software. 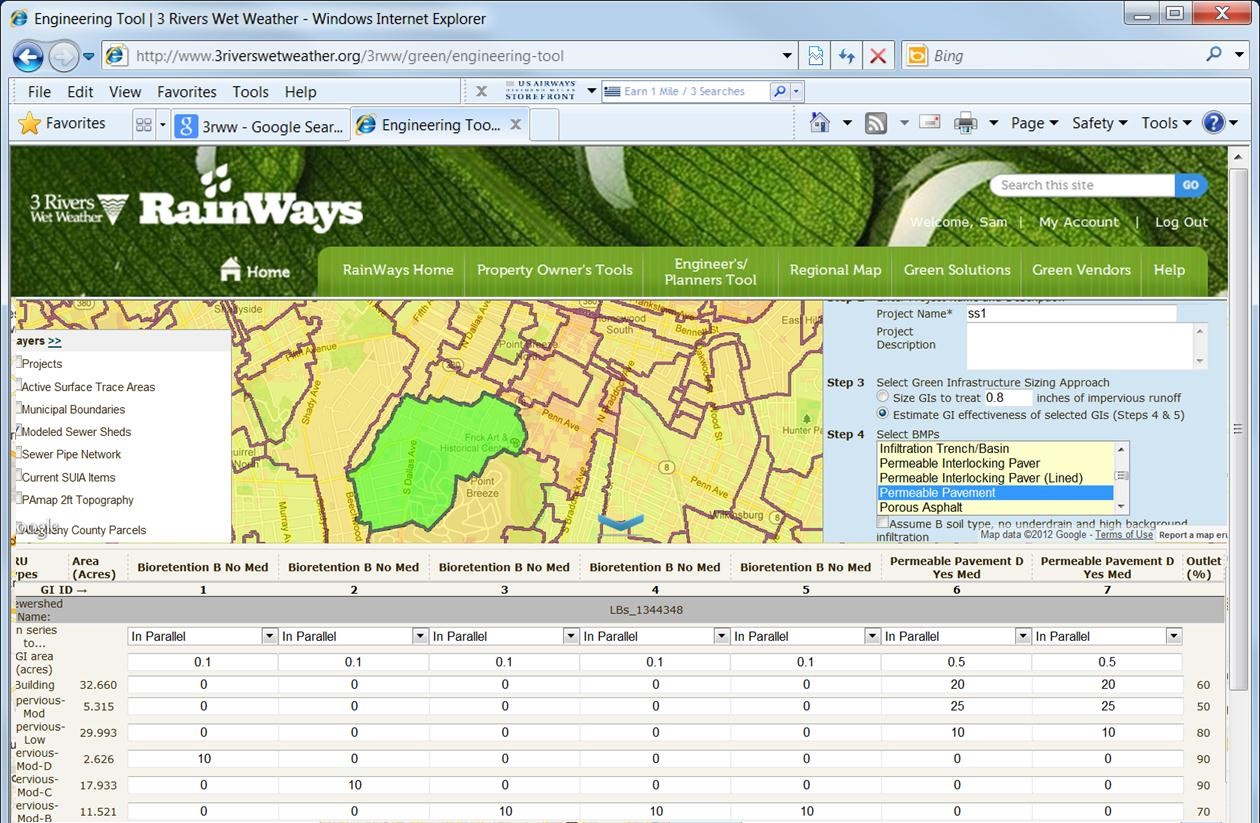 From the case study results presented in this chapter it can be concluded that USEPA’s SUSTAIN program is a useful GSI mapping and modeling program. SUSTAIN’s BST module can be used to identify the highest potential green stormwater infrastructure sites and projects for the combined sewer communities that want to reduce their CSO discharges. SUSTAIN BST results depend on user specified site specific siting criteria. From the case study results, it was noted that SUSTAIN BST can provide plenty of GSI opportunities even in regions with predominantly clay soils and steep slopes like Allegheny County. As demonstrated, an engineering screening analysis of GSI features can be done to create implementable site specific GSI projects. Finally, SUSTAIN BST should be used with caution because the output GSI maps are as good (or bad) as the quality of input GIS layers.